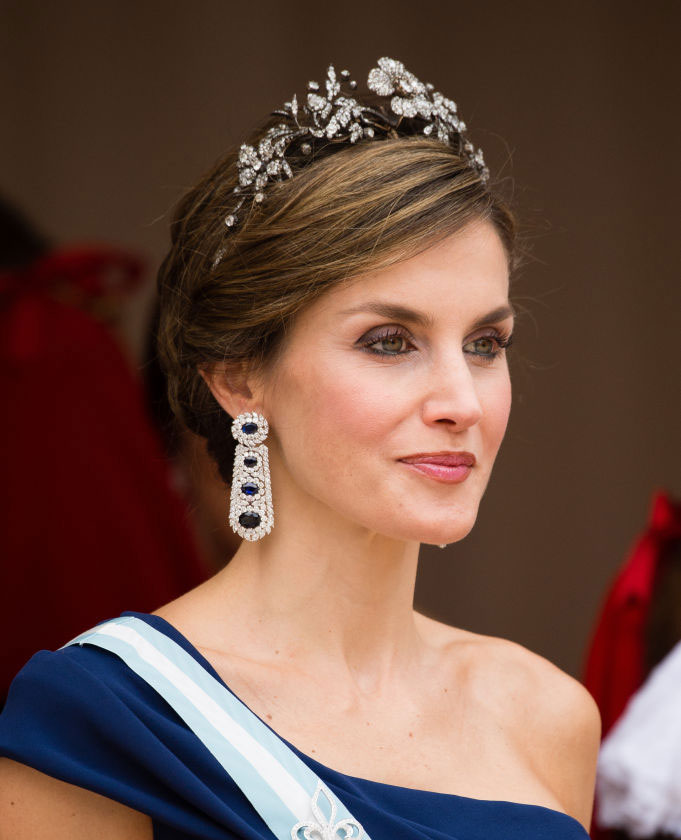 Queen Letizia of Spain attends the Lord Mayor's Banquet at the Guildhall during a State visit by the King and Queen of Spain on July 13, 2017 in London, England. (Photo by Jeff Spicer/Getty Images)

She is often referred to as the Spanish world’s version of Kate Middleton. Queen Letizia of Spain is a brunette beauty, strikingly stylish and a commoner who happened to marry the heir to a throne. Like her English counterpart, she is wildly popular with her subjects and the Latin media chronicles her every public move and outfit.

The 46-year-old Queen’s fashion playbook is also quite similar to the Duchess of Cambridge — both royals adhere to looks that are modern and unfussy, mixing designer labels with lower budget items from high street retailers. And both women are not averse to repeating outfits.

Queen Letizia has a light hand when it comes to her makeup and often styles her hair in a high ponytail. Her figure is lithe, suitable for the many sheath dresses she wears and her toned arms are often bare.

Whilst she often sports stiletto pumps or sling backs, they’re often from relatively inexpensive brands such as Steve Madden. Occasionally, she’ll surprise royal watchers by stepping out in such fare as leather leggings, perhaps a nod to her previous life as an independent career minded woman.

Before marrying Prince Felipe back in May 2004, Letizia Ortiz worked as a journalist for media outlets CNN+ (the Spanish all-news outlet is now closed) and ABC. The couple first met at a dinner party in 2002, and later that year Prince Felipe asked her for a date. It was a year long whirlwind romance, which the couple somehow kept under wraps, and they caught the entire country off-guard when they announced their official engagement a year later.

It was reported that the prince’s parents, King Juan Carlos and Queen Sofia, were opposed to the marriage. Not only was Letizia a commoner from a middle class family with a journalist father and nurse mother, but she was once married at age 25 and already divorced. The nation knew her from her television news anchor position and she appeared independent, opinionated and quite modern. Presumably, these were qualities which were unsettling and not considered desirable by this traditionalist Spanish royal family who are descendants of 15th century Catholic monarchists Ferdinand and Isabella.

But it appeared that love conquered all. The couple are happily married and now have two daughters. When King Juan Carlos abdicated in 2014, his only son Felipe became King of Spain and Letizia became the first commoner to be a Spanish queen.

However, Queen Letizia has hardly retired to the role of meek monarch.  If Kate Middleton has never stepped out of line to rock the House of Windsor, let’s just say Letizia has no problem ruffling royal feathers at the House of Bourbon. Last year, after exiting Easter Mass, cameras caught Queen Letizia  having a very public spat with her mother-in-law, Queen Sofia.

Upon leaving Palma Cathedral in Mallorca, Queen Letizia  deliberately blocked photographers from taking photos of her two daughters Princess Leonor and Princess Sofia with their grandmother, Queen Sofia. The two queens had a heated exchanged and it took King Felipe to step in and defuse the awkward situation.

Royals rarely go off script in public and this heated exchange in front of cameras was enough to cross language barriers and was widely reported in the English media, including The New York Times. Even other royals felt it necessary to publicly take sides. Marie Chantal of Greece, who is married to Crown Prince Pavlos – King Felipe’s cousin – took to social media and tweeted, “No grandmother deserves that type of treatment! Wow she’s shown her true colours.”

But the two queens have since mended the riff and have appeared in public together, posing for the cameras, all smiles.

If anything, Queen Letizia has shown she is an independent woman. This is one Spanish sovereign who is supremely spirited, sophisticated and undeniably stylish.

The era of wearing a dress just once seems dated and wasteful. Like other modern day royals — and most commoners — Queen Letizia will repeatedly wear items from her wardrobe. She wore this pink Michael Kors dress on a State visit to the US last year and recently brought it out again this summer.

Zara seems to be a favourite trendy high street store of the Queen, who is often photographed in outfits from the Spanish retailer. Last week, there was a flurry of media reports when she stepped out in a tweed dress, which was featured in Zara’s summer sale.

Another fashion bargain for the Queen is the super-trendy British e-commerce site, Asos.com — the source of this elegant embroidered dress.

For an event at a contemporary art gallery, Queen Letizia went for an ultra-modern look — a sleek leather dress from the Swedish retailer, & Other Stories, which is a division of H&M.

The Queen turned heads last year when she appeared wearing leather leggings. But she toned down the rock ‘n roll image by pairing it with a classic tweedy looking overcoat.

You would not immediately associate aristocrats with jumpsuits but here, Queen Letizia made this le smoking style Hugo Boss jumpsuit look regal.

Seen here with her husband, King Felipe VI of Spain and Princess Anne, during a 2017 state visit to the UK, Queen Letizia brought a refreshing touch of Hollywood glamour.  Her artfully draped gown looks like the kind of outfit a starlet would wear on a red carpet.