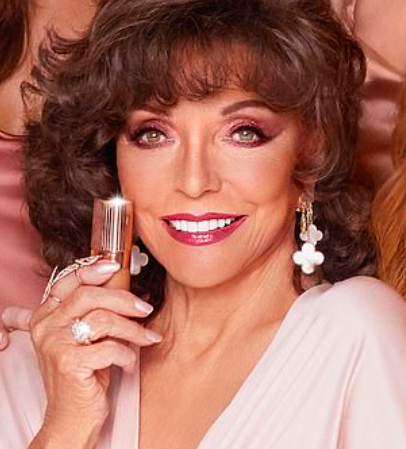 Dame Joan Collins was a beauty from birth. Lore has it that she was such a pretty baby, her mother had to hang a sign on her stroller that said, “Do Not Kiss,” to deter the numerous well-wishers.

Now at age 86, the actress is still considered a raving beauty. So much so, she is starring in the latest ad for Charlotte Tilbury makeup. The campaign features the Dynasty actress amongst a bevy of younger beauties to promote the brand’s latest product – Airbrush Flawless Foundation – which will be available in 44 shades.

When the product was first announced earlier this summer, it reportedly garnered a waiting list of 17,000. It’s not merely a foundation – it promises to moisturize up to 24 hours, reduce the appearance of wrinkles and give the look of “flawless poreless-looking skin.”

This marks the British beauty brand’s first ever digital campaign and features a whopping 66 women and men. The flawless but diverse group includes Miss Fame of RuPaul’s Drag Race, Tilbury, the makeup artist herself, along with her mother Patsy and nieces Bella and Sofia.

This is not Collins’ first foray into the world of cosmetic products. She also has her own line of beauty products, Joan Collins Timeless Beauty, which is available online.

But this particular Charlotte Tilbury advert is significant. It’s a cool brand conceived by a major make-up artist who works with A-list celebrities from Penelope Cruz to supermodels like Kate Moss and major fashion publications as Vogue. But instead of aiming for exclusivity, she is embracing a diverse crowd, including an older audience.

Sure, Joan Collins has always exuded an ultra-glamorous image, but Tilbury is a firm believer that make-up should be for everyone, regardless of age or status.

As she states on her website, “I want to make every woman the most beautiful version of themselves.”