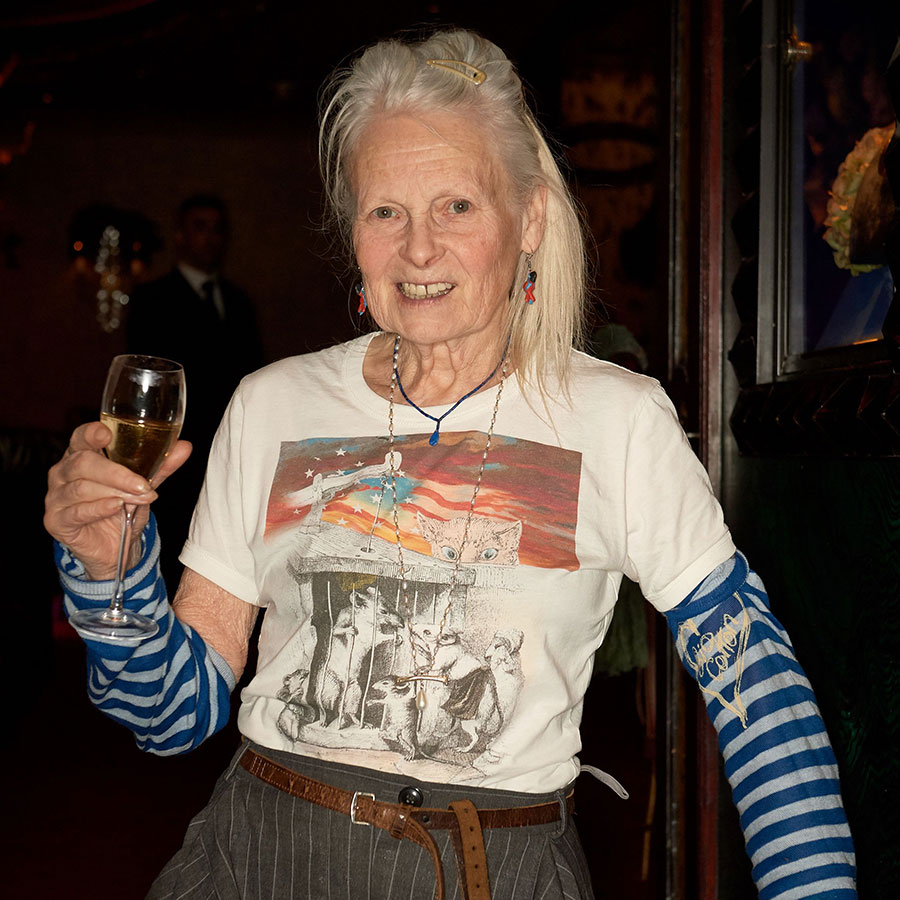 A fashion collaboration between a 78-year-old British designer and a youthful California-based skate-and-surf sneaker brand might seem like the most unlikely of hookups.

But Dame Vivienne Westwood, the designer credited with introducing the punk look to the mainstream back in the early ’70s and, who upon receiving THE honour from the Queen, twirled for the cameras to reveal she was panty-less, remains one of the most provocative, controversial and outspoken forces in fashion today. And the footwear brand Vans, which has a counter-culture, surfer vibe and dates back to the late ’60s, has always embraced liberation and encouraged individualism.  So perhaps it’s not such an unholy union.

The two brands have partnered to launch a capsule collection of sneakers which pay homage to the codes from both their archives. The Vans X Vivienne Westwood Anglomania collection goes on sale Sept. 20 in select Vans stores and online. The lineup includes one of Vans’ most famous shoes — the classic checkerboard slip-on — that incorporates Westwood’s famous DESTROY graphic. Both designs made their debut in 1977.

In a whimsical mashup between brands,  a tan leather hightop features an embossed hand-written letter — complete with postage stamp — from California to the designer’s flagship store in London.

Another style in the collab includes a leather hightop with a strap and buckle inspired by the pirate boots in the designer’s legendary 1981 Pirate collection, which was famously revived by Kate Moss in the early 2000s. An interesting side note that indicates the designer is a perfect candidate to collaborate on a sneaker line: her 1983 Witches collection was one of the first runway shows to feature sneakers, now a mainstay of luxury collections.

Westwood’s controversial yet highly influential fashion career began in the early ’70s with her then partner, Malcolm McLaren, manager of the Sex Pistols. The duo opened a store, Let It Rock, on fashionable King’s Road, which became a hub for punk rock fashion with t-shirts with revolutionary slogans and bondage-strap trousers. By the ’80s, Westwood was recognized as one of the great design talents of the century.

You might be asking yourself if her Vans sneaker collab should be left to the skateboarding set.  Zoomers who are discovering them for the first time,  will find them appealing. The cool easy comfort of Vans sneakers are a main selling feature.

But fans of Westwood might be asking an entirely different question.

The designer often makes headlines for her outspoken political views and environmental concerns. She is famously anti-consumerist and has indicated that society should buy less and be more thoughtful and discriminating with their purchases. It’s a conflicting notion since she is in the business of pushing new products every season. But now she’s partnered with a company that belongs to the Sustainable Apparel Collection and has a target of using 100 per cent renewable energy in its operation by 2025.

It’s a far cry from the 1993 Paris show when Westwood sent Naomi Campbell down the runway in sky-high platforms, which ended in a tumble seen around the world . Campbell’s taken to wearing running shoes of late, perhaps Westwood will send her a pair of the Vans.

See below for a selection from the VansXVivienneWestwood Anglomania collection, available in select Vans stores and online at vans.ca and Vivienne-Westwood.com.

Zoomer-Friendly: The Bellroy Unisex Sling Bag for Your Next Trip

Zoomer-Friendly: The Multi-Functional Poncho Gets a Stylish Makeover