How Paintings by Group of Seven Artist Lawren S. Harris Ended Up on Jeanne Lottie’s Handbags 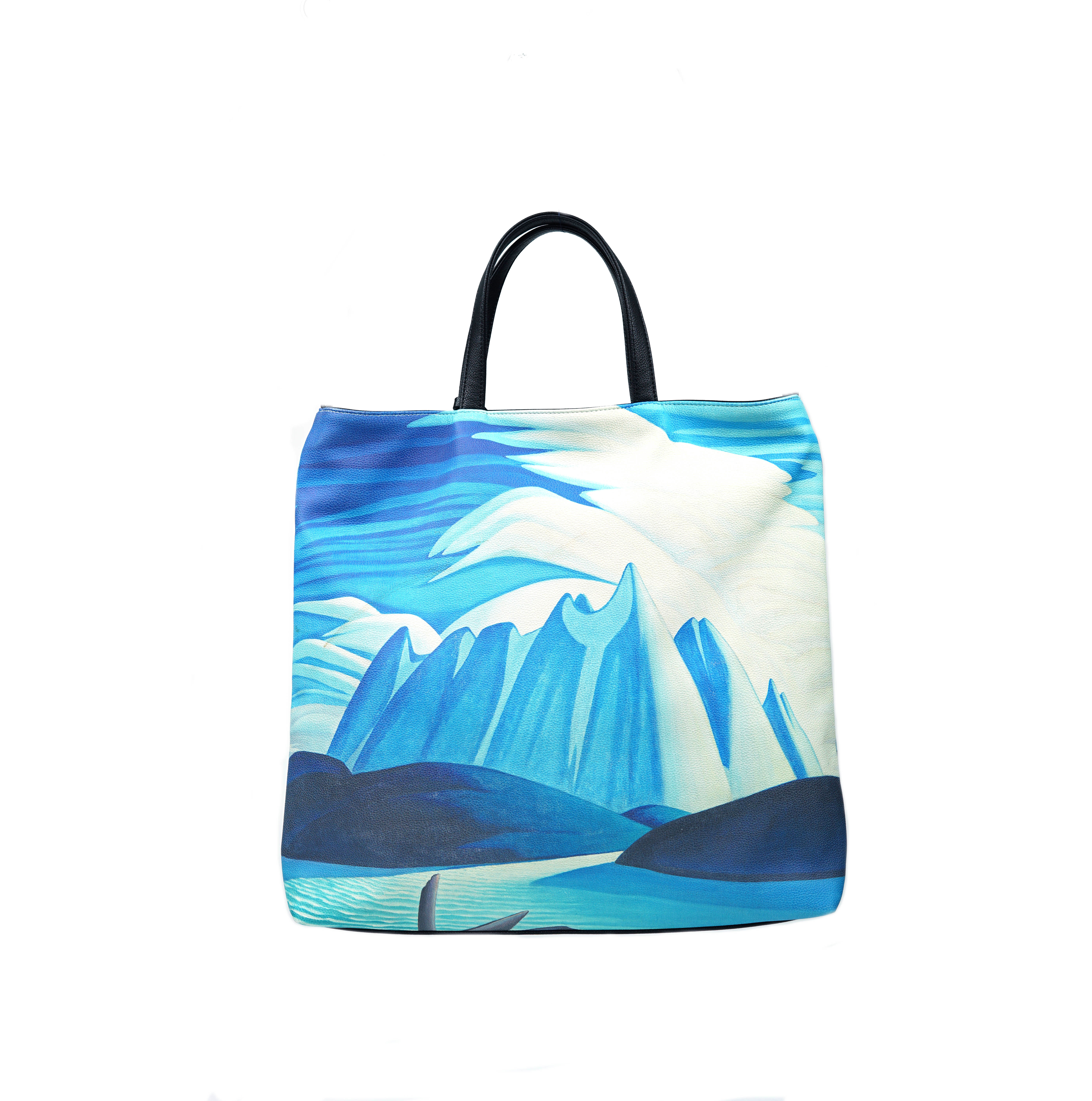 The iconic Canadian painting Lake and Mountains by Group of Seven artist Lawren S. Harris just got a stylish new lease on life as fashion accessory.

The 1928 oil painting, which hangs in the the Art Gallery of Ontario in Toronto, is reproduced on a fall collection of vegan leather bags and silk scarves from Toronto-based label Jeanne Lottie.

Abstract landscapes are not the first thing that comes to mind when you think of a handbag, but the austere graphic lines and the icy blues of the iconic Canadian painting lend themselves nicely to Lottie’s modern, three-dimensional objects. Besides, this is the closest you can get to Harris’ art: One of his paintings, Mountain Forms,  set a Canadian art record when it sold for $9.5 million ($11.2 million with buyer’s premium) at auction in 2016.

For Jane Ip, the designer behind the Jeanne Lottie label, the hue factor was alluring. “I love the colour blue on bags and scarves, which goes easily well with most things.”

Designer Jane Ip of Jeanne Lottie, standing in front of Lawren Harris’ Lake and Mountains at the Art Gallery of Ontario.

For Ip, the road to Lake and Mountains was serendipitous, if not a game of connect the dots.

“I think Lawren Harris was calling my name,” she said.

About a year ago, she was looking for a house that would serve as the Jeanne Lottie showroom. Walking around the Yorkville area of Toronto, she fell in love with a small, brick rowhouse and put in an offer. It was only after she bought the property that she discovered the house was immortalized in a 1920 Harris painting called House, Toronto.

What most people don’t know is that, early in his career, Canada’s most famous landscape artist spent a great deal of time drawing and painting urban landscapes in Toronto and European cities he visited.  Harris and Group of Seven cofounder J. E. H. MacDonald used to travel the streets of Toronto, sketching city scenes, from the worker’s cottage like the one Ip bought on 30 Roden Place to the grand homes of upper class residents in Rosedale.

Later painted in oil, the location of House, Toronto was a mystery until it was bought at auction for $115,000 and the new owner hired heritage consultants to track it down. The search, chronicled by historian Ellen Scheinberg and  art curator Jim Burant in the October 2017 edition of Spacing magazine, involved architects who suggested areas they should search, and archivists who pinned down the neighbourhood. Scheinberg found the Second Empire-style home with the dormers and mansard roof by “virtually strolling down the streets of Yorkville in her office using Google maps.”

Ip’s connection to Harris did not end with the painting of the 950-square-foot, orange-and-yellow house, which she is developing into a line for spring 2020.

For years, she has been walking by electrical box at an intersection in the neighbourhood that featured a painting of a man on it. After buying the house, she discovered it was an artist’s rendition of Harris.

“I say hi to him now whenever I pass by the box,” she says.

Jeanne Lottie’s Harris Collection is available at the AGO Gallery Boutique, The National Gallery in Ottawa and jeannelottie.com

Front Runner: How Sneakers Have Gone From the Street to the Boardroom