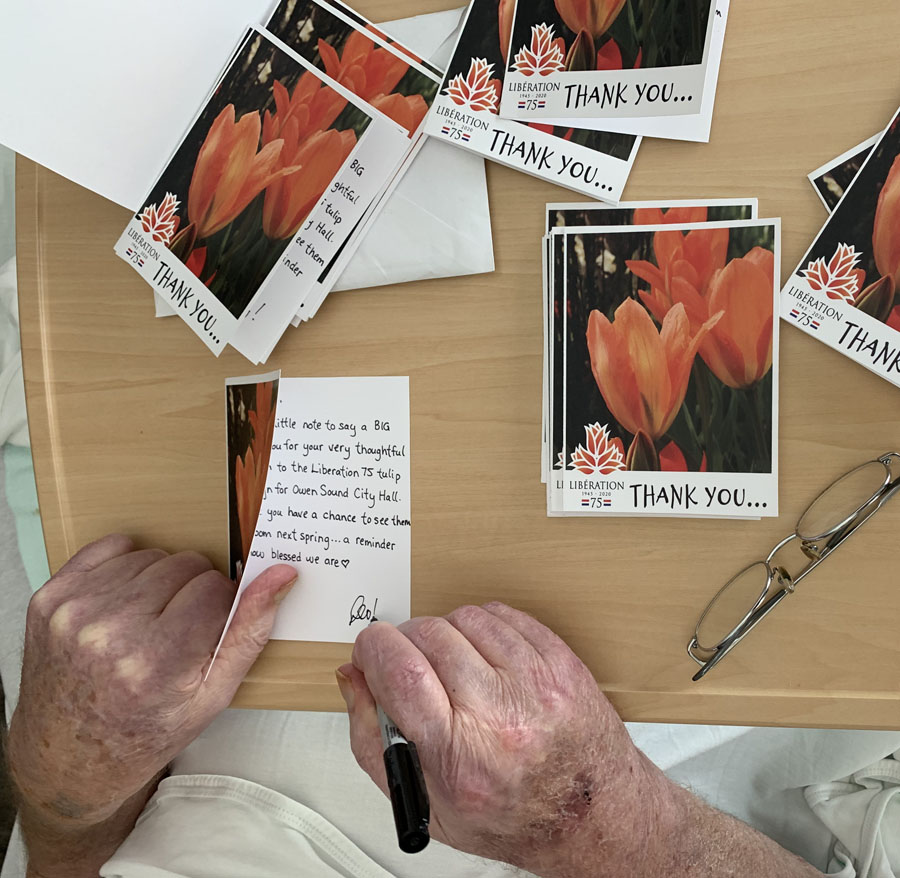 It’s that time of year when a gardener’s thoughts turn to spring and how to keep bulbs from becoming squirrel snacks. The rodents have an aversion to daffodils, alliums and hyacinths, but they absolutely love a tulip.

So when I decided to buy 30 Liberation75 bulbs from the Canadian Tulip Festival, I called general manager Jo Riding in Ottawa to ask how to stop the bushy-tailed thieves from digging up my Toronto garden. Her solution — sprinkling a little human hair or dog hair on top of the soil — was a little creepy, but once she started talking about the flower itself, I was entranced.

Riding likes to say every tulip tells a story, and the Liberation75 story begins with tyranny and ends with freedom. Officially known as the Orange Emperor, the tulip festival plucked it  (and renamed it) from more than 4,000 breeds because it is orange, easy to grow and should be in bloom on May 5, 2020 — the 75th anniversary of the day Allied soldiers, including many Canadian troops, liberated the Netherlands from Hitler’s brutal dictatorship.

“It’s a nod to Dutch royalty,” Riding explains. “It is the Dutch orange and it is a slightly crown-shaped tulip.”

Remembrance Day and its poppies will have faded by the time the Liberation75 tulips start to flower. It’s all part of the festival’s grand plan to blanket the country with the Dutch national flower in remembrance of 1.1 million Canadians who served in the Second World War.

From Whitehorse to Yarmouth, N.S., gardeners have been digging out their wallets and ordering $15 bags of 15 bulbs from the festival’s Liberation75 website, where one dollar from every sale will be donated to the Royal Canadian Legion. So far, more than 800,000 have been sent to Canada from Holland, with the third and final shipment due Oct. 24.

Of the 1.1 million tulips, another significant number — 100,000 — are a gift to the people of Canada from the Dutch Royal family, the same number they gave in 1945 to thank us for helping to liberate the country and providing safe haven for the Royals between 1940 and 1945. Every year since, the Royals have sent 20,000 bulbs to Ottawa, sowing the seeds for the renowned tulip festival, which began in 1953. The National Capital Commission, which oversees the planning and planting of 120 beds in Ottawa parks, will match that with another gift of 100,000 Liberation75 tulips.

Landscape architect Tina Liu, the design manager for the NCC’s floral program, says contractors will plant a total of 600,000 bulbs in the coming days, and 100,000 of those will be Liberation75 tulips. Some of those will go into beds outside the Ottawa Civic Hospital site, where Dutch Princess Margriet was born in 1943.

For the Haak family of Owen Sound, Ont., the story begins in Holland, where Leo Haak lived in the northern city of Gronigen and his wife Mynie Buys — who met after they immigrated to Canada — lived in Aalsmeer, 13 km from Amsterdam.

Leo was six when Canadian soldiers helped liberate the Netherlands from Nazi occupation on May 5, 1945. More than 7,500 Canadians lost their lives in the effort to free the Dutch. “He doesn’t remember a lot about the war,” says his daughter, Monica Brown. “What stands out is his lifelong gratitude for the Canadian soldiers who came over. Any anniversary of the liberation or Remembrance Day, he would always be at the Cenotaph. It didn’t matter if it was minus 20.”

Fifty years ago, Leo helped raise money from the Dutch community to buy and donate 2,000 tulips to the city of Owen Sound on the 25th anniversary. Like any spring bulb, tulips need to be planted before the ground freezes in order to blossom on the big day.

This year, his daughter is spearheading an effort to replicate the feat, this time with 2,000 orange Liberation75s, which council has agreed to plant outside city hall. Brown will also plant some in her garden to honour her dad, who was diagnosed with Stage 4 melanoma in June. “I’m sure they’ll bring a tear to my eye when they bloom,” she says, choking up. “I bought 75 for myself. I thought that was a significant number.”

Brown said she heard stories about the Dutch famine in the winter of 1944-1945, when some people survived by eating sugar beets and tulip bulbs. Her mother, the youngest of eight children, remembers the only time she saw her dad cry. “He went out to a neighbour’s looking for food and came back empty handed,” says Brown.

Tulip festival general manager Riding has her own family connection to the war,  and it began with Project ’45, an educational component of the 2020 festival created with the Canadian Mapping and Research Association. When it is up and running in May, the website will allow Canadians to choose a unit and get a detailed account of its movements and what its members were going through on any given day, based on soldiers’ diaries.

Riding and her husband David, the festival’s art director, knew his grandfather served in the Second World War, but had little information about where he served or what he went through.

In testing Project ’45, they discovered George, who belonged to the Royal Montreal Regiment, survived the particularly brutal Battle of the Leopold Canal in September 1944, part of the Scheldt campaign in northeastern Europe, which paved the way for the liberation of the Netherlands. “Two boats went in and six guys came out,” says Riding, adding that she will plant 75 tulips for George in her home garden. “It’s just amazing that it hit so close to home.”

Trees and flowers have always been a powerful reminder of those we have loved and lost, and my garden is no exception. Front and centre is a magnolia tree that blooms fleetingly in spring, its pale-cream, saucer-shaped flowers falling within days of opening. It was chosen because the variety’s name, Elizabeth, is the same as my mom’s, and the magnolia was her favourite spring flower. All my purple posies were planted in memory of my mother-in-law Donna, who was one of those unabashed purple-loving people.

Next year, squirrels willing, orange will be added to my garden’s palette. When the Liberation75s come up, they will remind me of Leo Haak and George Riding, two men separated by time and place, but inextricably linked by a war that we are implored never to forget.