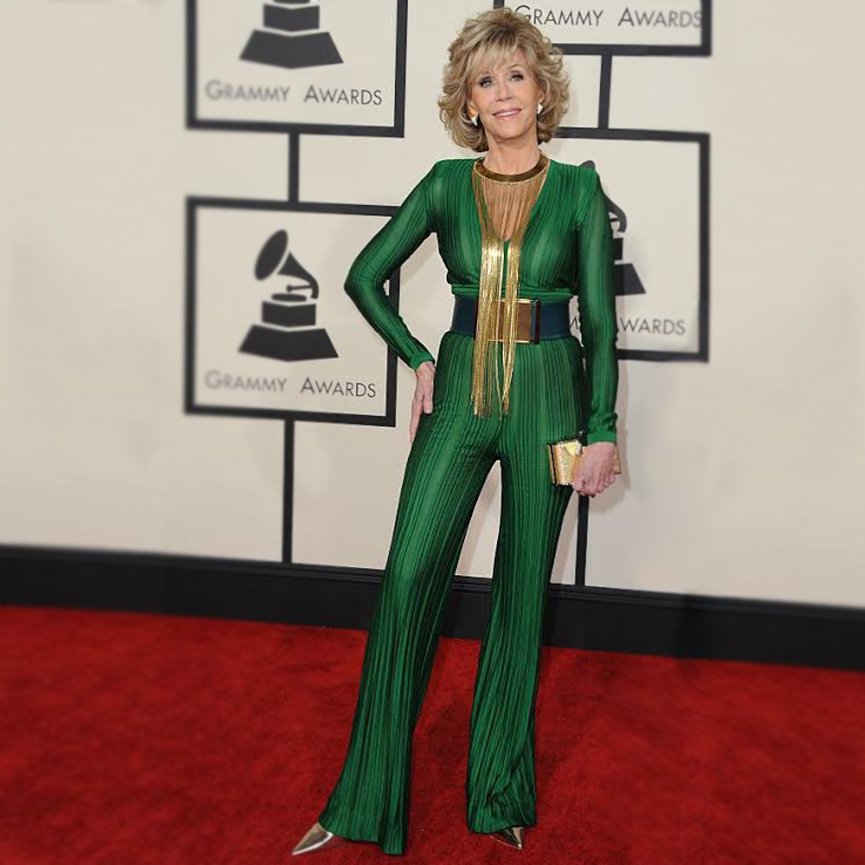 Jane Fonda on the red carpet for the 57th Annual Grammy Awards in Los Angeles in 2015. Photo: Valerie Macon/AFP via Getty Images

The last fashion supernova moment of the jumpsuit was the ’70s, an era when the onesie was so popular, it was adopted by both women and men. Mega-stars such as Cher, Elvis Presley, David Bowie and Abba – in all their glittery, shiny, skin-tight, one-piece glory – helped propel the trend to soaring heights.

By the time it reached a saturation point in the early ’80s, it reportedly prompted the esteemed American designer Geoffrey Beene to christen the jumpsuit “the ballgown of the next century.”

Some 40 years later, his fashion forecast has come to fruition.

In the midst of a jumpsuit revival these past few years – on a scale and scope not seen since the disco era – it has emerged as a modern alternative to the cocktail dress. When it comes to effortless dressing, the jumpsuit is jonesing to usurp the Little Black Dress as the last minute go-to in a woman’s wardrobe.

Surprisingly, for a garment characterized for its one-piece construction, it boasts a multitude of personalities. Today, you can find jumpsuits that evoke le smoking sophistication with a tuxedo-like style, while others offer the full-blown drama of a ballgown with an attached train. Then there is the glamorous glittering sequinned jumpsuits that will entice you to relive those feverish Saturday nights on the dance floor.

Praised for ease, comfort and simplicity, today’s jumpsuit seems primed for the boomer body, with shapes that are fluid, relaxed and louche enough to deftly hide the evidence of life lived well. It’s a single garment – put it on and you’re ready to go – obliterating any fussy equation of trying to piece together an ensemble from a myriad of options in your wardrobe. And they often have those rarified features found lacking in evening wear: pockets and long sleeves.

It’s quite a leap from its origins – around 1919 – when the jumpsuit was conceived as a utilitarian garment for parachuters to wear when jumping out of planes. Various artists, such as the Italian futurist Ernesto Michahelles, known as Thayaht, toyed with the design as a garment for the future. But the first major fashion designer to actually propose the jumpsuit as a fashion garment was Elsa Schiaparelli in the 1930s.

With the advent of the Second World War, the jumpsuit returned to its utilitarian nature and was conscripted as attire for women to wear to factory jobs while their men folk were off on the front lines.  It wasn’t until the 1960s that fashion took an interest in the one-piece garment again, thanks to couturiers such as Yves Saint Laurent and André Courrèges, leading up to an onslaught of jumpsuits in the ’70s.

Over the years, its utilitarian nature was never lost on certain industries – car racing, motorcycle racing, military pilots and mechanics – embraced the baggy and practical design. But it’s a garment that would be hard to categorize or associate with one particular group. No other outfit straddles such wide divides. Neil Armstrong wore a jumpsuit the day he took a giant step for mankind on the moon;  it’s also worn by men and women at their worst – those incarcerated for crimes.

Meanwhile, on the fashion frontier, the jumpsuit is displaying wild ambition these days, successfully infiltrating both the red carpet and bridal wear, hallowed domains dominated by a stranglehold of evening gowns.

The 2014 New Orleans  nuptials of Solange Knowles (Beyoncé’s little sister)  included several wardrobe changes, but it was her wedding outfit – a winter-white jumpsuit – that sent the internet and bridal industry into overdrive.

Similarly, Jane Fonda also lit up social media sites when she showed up in an envy-inducing green Balmain jumpsuit on the red carpet at the 2015 Grammys, proving the jumpsuit is ageless. Her stylist, Tanya Gill, said in an interview she thought the jumpsuit “seemed perfect for the woman who had defined a whole generation’s workout regimes.”

But it wasn’t a one-time styling trick. Gill said she has put Fonda in many jumpsuits, because they are “the epitome of a modern woman’s wardrobe.”

And that’s an important note on the jumpsuit’s return. It suggests this is not merely a revival, but shows it has matured beyond a trend. Evidence suggests it’s here to stay.

Check any major fashion e-commerce site and scroll down the menu for women’s apparel, and you’ll notice there is now a category for jumpsuits. It is no longer a specialty item.

Now Virgin Galactic, the aviation company founded by Sir Richard Branson, has unveiled the outfits space tourists will wear on their $250,000 rocket flight on the company’s SpaceShipTwo, which is scheduled to launch in 2020.

The few lucky civilians who take off next year for the final frontier will be wearing, – what else? –  a sleek blue jumpsuit.

Please see our gallery for a few earth-bound but party-ready jumpsuits which cost a lot less than $250,000.

Wrap Jumpsuit, $235. For a retailer near you, please consult josephribkoff.com.

Embellished Jumpsuit, $264. For a retailer near you, please consult josephribkoff.com.