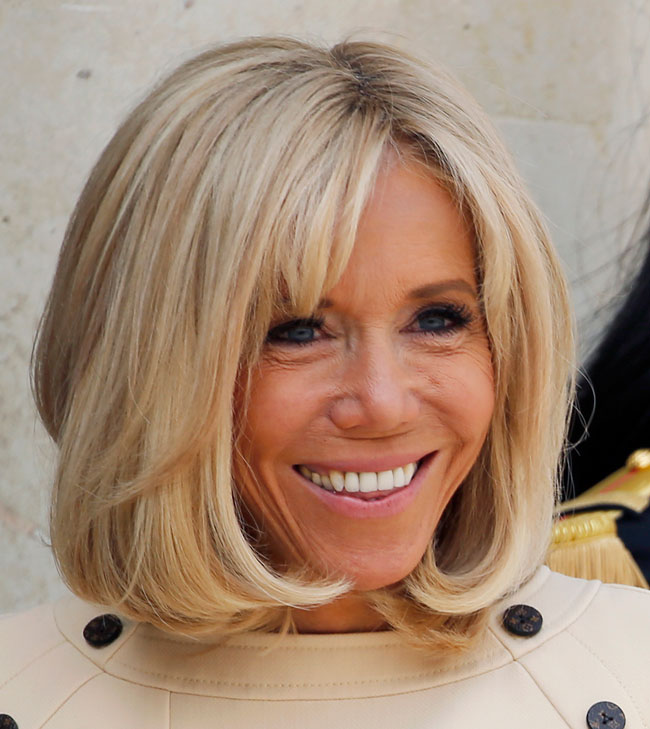 Please take a moment with this photograph of two very chic European women (below). We have been collectively consumed with the British Royal Family’s females and decoding the signals they send with their diplomatic dressing, but there are lessons to be learned from other female figureheads who speak volumes through their elegant clothing choices. Queen Mathilde of Belgium and Brigitte Macron, wife of the French president, are pictured in November 2018 on President Emmanuel Macron’s state visit to Belgium. They are both grown women who dress up for a living, and they do it well. They have internalized all the codes around what is appropriate for each occasion.

But look more closely. Macron is 66 and Queen Mathilde is 46. They are both working simple, sleek lines and neutral monochromatic palettes. They both look great. And yet, despite the two-decade difference in their ages, Madame Macron is definitively working a fresher vibe than the Queen. Let’s break this down because Macron is giving us a master class in how to look modern and current.

First of all, we must account for hair because every outfit lives and dies by the hair choice. Macron has a typically French, devil-may-care, loose and sexy shag with cute bangs. The French just do bedhead so damned well, and Macron shows that the look is not just for kids. In fact, it is more effective at her age and station than it is on an off-duty teenaged model.

In contrast, Queen Mathilde probably is required to have more of a “done” do (for crowns and stuff), and she probably customarily wears a hat, also for protocol reasons. The hat is not good for photographs, since it has to sit so far back on the head that it has rather a bird’s nest effect. If you do a deep dive into the Instagram fan sites dedicated to the Belgian-born queen consort, she is fairly consistent in her highly coiffed look and does indeed sport all manner of headgear, usually diamond encrusted, with aplomb. But beside Macron’s modern chop, her hair comes off as a tad staid. Note to self: hide the hairbrush!

Mathilde’s grey dress and cape are simple and clean of line, and the below-knee hemline screams respectability. But overall, the lack of adornment and the dull colour is in itself aging. “Proper” can be a pall: just look at how mumsy even someone as youthful as Duchess Kate can look in duty-first garments. Both women in this picture are wearing similar, classic, knotted wool scarves. They could not be more Euro. But Macron’s jaunty pink one, along with matching gloves, elevates her outfit. And the slim-legged pantsuit, with bold lapels and a crisp white shirt, gives her instant authority and reads as youthful.

Now, Macron has an advantage, with Louis Vuitton in her corner. The classic but also very hip French label, designed by Nicolas Ghesquière, has been unofficially dressing the French first lady since her husband came to office. Remember, Emmanuel Macron is 25 years younger than his wife. But the collaboration with Ghesquière has enabled Macron to create a signature style – quintessentially New French but also very specific. She often wears short hemlines and slim trousers; she loves a bold pop of colour and doesn’t shy away from shine and sparkle. In short, she breaks all the old rules of what not to wear as you age. And it works: she somehow uses clothing to look as young as her hubbie. And Macron’s je ne c’est quoi makes other first ladies such as Mathilde or, indeed, Melania Trump look less current by comparison.

Let’s take a quick trip back over her matchups with Melania over the years. Melania loves a good French-couture buying spree. And whatever you think of her, you have to admit the former model looks very good in clothes. But her selections often verge on costume-y. Take a look at that second Trump/Macron state dinner last year at the White House (the reciprocal to an earlier state event in France). We had pomp, we had iconography in fashion. But we also had a style showdown between the two first ladies. Remember that white hat on Melania in the Rose Garden taken with the Macrons? See what I mean about how Mrs. Trump can fail on the side of a retrograde view of femininity (’50s-style silhouettes with girlish affectations) and culture (a mistake she has repeated with pith helmet and jodhpurs in Africa). And remember that odd yellow cape with purple sleeves at the NATO reception in London? What superhero was she invoking there?

But what showed up most in the portraits of the American and French leaders and their spouses was something you can’t buy. Brigitte Macron has a confidence about her as she stands proudly beside her husband: you can tell she feels she is his equal. That is something hundreds of thousands of dollars of couture can’t buy. Her LV Grecian column dress is perfectly judged, in a luxe cream with silver cord wrapping it to her form. She does not outshine her hostess, who chose a sparkling Chanel haute couture column dress. And most importantly, Macron puts all thoughts of ageism and age-appropriate dressing to rest.

Macron has always been upfront and quite witty about the age difference with her husband. “Of course we have breakfast together, me and my wrinkles, him with his youth, but it’s like that.” They have also been defiant about their unconventional meeting (she was his teacher, of course), and now not just her own children but the whole world has accepted – and applauded – their union. She is also clear about her rejection of the ornamental role of first lady: “I’m no vase,” was her curt and clever retort.

So it seems the real lesson about how to dress to defy your age boils down to the old maxim: it’s not about age, it’s about attitude. And while Macron reportedly went under the knife this summer in a “three-hour facial rejuvenation,” it seems that is too short a spell and too little downtime for a classic facelift. Indeed, Macron’s style, hung on a razor-thin frame, already makes you look away from pesky details like wrinkles. But it is her confidence and joie de vivre that consistently make her look more on point than everyone around her.

The First Ladies’ War of the Wardrobes