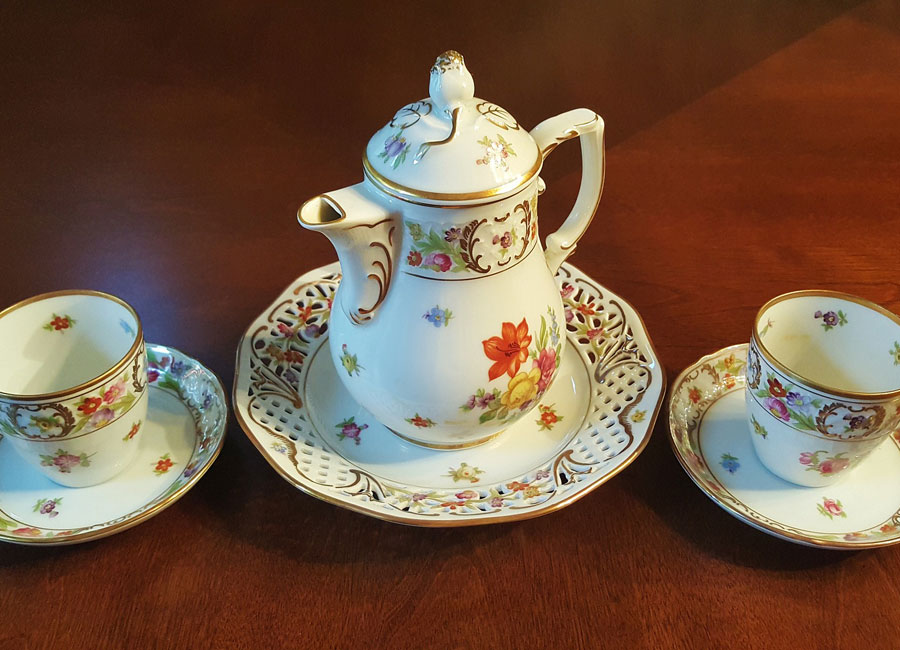 Even boomers who are blessed with large families are finding that they can’t give their stuff away.

I’ve always known there would be no one to take our stuff – the furniture, the dishes, the silver – the accumulation of a lifetime. Doug and I have no children, and our niece and nephew live far away. I didn’t think much about it until a New York Times article on the subject went viral. It seems even boomers who are blessed with large families are finding that they can’t give it away.

“The boomers are the last generation to have any kind of guilt about holding onto things that belonged to their parents and grandparents,” says Karen Shinn, co-owner of Downsizing Divas, a company that helps seniors pare down their possessions and move. For me, the connection didn’t even have to be that close. Take the tale of my Aunt Becky’s Stinkwood chest. We didn’t know her that well because she lived in Africa. But we knew that heavy carved chinoiserie trunk was her prized possession. She eventually moved to London, and I travelled there at the end of her life. After she died, I dutifully shipped the trunk from England to Toronto, only to find that the best spot for it was in our unfinished basement. When my brother Sam expressed an interest, I sent it on to Vancouver. That was 1997. It’s probably still in his basement – he isn’t sure.

I feel very differently about my mother’s dishes and silverware. I remember being very upset when she gave me her good silver-plated flatware a little over a year before her death. She was already sick, and I took it as a sign that she was giving up. But it was more like passing on the responsibility and pleasure of getting the family together for holidays and keeping traditions alive. We use the cutlery all the time and the dishes on special occasions. They bring back memories and help make new ones – it would be great to have someone to give them to in turn – preferably someone who would remember spending happy evenings with us.

My colleague Bill Anderson (host of Bill’s Classical Jukebox on The New Classical FM) says his children want no part of the antiques that have been in his family for two and three generations. They don’t even want the prized cranberry glassware that was popular in the Victorian era. “We used to joke that if we lost our jobs we could fall back on the cranberry,” he told me. “Now we’re finding it has almost no value.” Bill and his wife, Sharon, recently moved to a smaller place and they had to purge many of their possessions. Not only did Bill’s kids refuse to take his family treasures, so did consignment shops. After being turned down by the Scott Mission, Casey House and the Salvation Army, he was delighted when Habitat for Humanity accepted his donation.

“The kids are in their 30s and 40s, and they think our things are stuffy and not cool,” he told me. “They have no sentimental attachment to it.” They probably have no room for it either. The cost of housing has younger people living in smaller spaces. That would explain why Mid-Century Modern seems to be the only historical style millennials are mad for.

Doug came to our marriage with a veritable trove of that clunky ornate Victorian stuff. Over the years, he gradually let most of it go. But we use a few key pieces, notably a heavy mahogany gate-leg dining room table from the 1840s that belonged to his great great grandfather. He always treated it more like a fragile relative than an object. Shortly before the wedding I mistakenly sprayed it with oven cleaner instead of furniture polish. I was mortified! We sent it to restorers, and they improved it but could not get rid of all the damage. Doug’s understanding reaction to my blunder confirmed that he was the right guy to marry.

Shinn sees it as a shift in values – a move away from materialism. Her business is booming because two generations – boomers and their parents – are downsizing and another is saying they are not that into stuff. “Millennials aren’t so enamoured with collecting things, they’re more interested in collecting experiences,” she says.

My brother Moses doesn’t see it that way. “If the children don’t want it, then the grandchildren will for sure,” he says. That’s why Bill has put some things in storage. “At the back of my mind, I’m thinking someday they may regret not taking these heirlooms.”

A version of this article appeared in the November 2017 issue with the headline, “The Thing About Heirlooms…” p. 30.

A Certain Vintage: Falling in Love with the Art of Antiquing