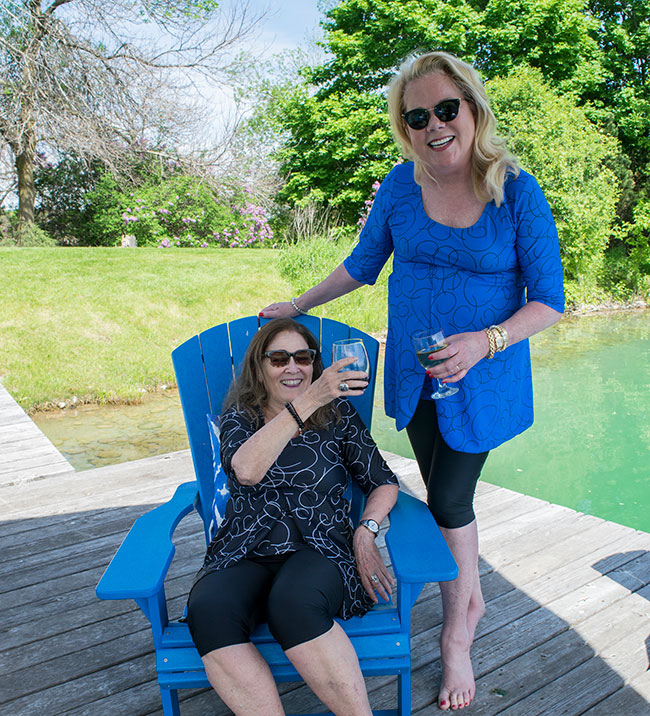 Two accidental entrepreneurs take on the delicate business of bathing suits
for the mature female body.

Could someone please explain why, at the exact moment middle-aged women have an abundance of confidence and couldn’t care less what other people think, we are paralyzed by the thought of putting on a bathing suit? Sure, we give good lip service to the idea that we are at peace with the physical manifestations of aging. We want to stand up and declare we are done with all the damned deprivations, we’re ready to embrace life’s pleasures and we accept the body that comes along with that. But when it comes to the bulges, lumps and sags we acquire as we age, the changing room is where the Spandex really hits the cellulite.

Two unlikely Toronto entrepreneurs stumbled upon an idea for a suit that does away with that dreaded summer reckoning. Best friends Velvet Haney, 65, and Rachel Manley, 72, have taken the proverbial doodle on a napkin and made it into a company called Bathing Boomers. The tagline? “To help camouflage a life well-lived.”

They met in Toronto when Haney was hosting her book club’s monthly dinner, and Manley was their first visiting author, invited to talk about her first book of non-fiction, Drumblair: Memories of a Jamaican Childhood. They had so much fun that Manley ended up joining the group of 12 accomplished women, and the two became fast friends. Cut to one steamy summer afternoon in 2016 when the two pals were propping up a bar in Cambridge, Mass. Manley, who teaches creative writing in the Master of Fine Arts program at nearby Lesley University, had convinced Haney to enrol.

“Rachel was lamenting the summer ahead,” recalls Haney, “and she just burst out with how she couldn’t relax and be herself, how much she dreaded putting on a swimsuit. So I said, ‘Remember those full-body suits from the 1900s?’” Manley completed her thought with “the ones that cover up the flubbies under your arms!”

The pair fell about laughing as “we were drinking like fish,” Manley says, but the kernel of an idea started to germinate. There was something very empowering about it.

“We need to cover up all our jiggly bits and bumps,” says Haney. “I’m not ashamed. I’m realistic about my body — and as a former model I swore I’d never go on a diet ever again — but I also want to feel dignified and comfortable.”

Haney picked up a pen and sketched it out. The bathing dress and cropped leggings covered the upper arm and upper leg, flattened the paunch and distracted the eye with flowy material. A business was born, “created by older women for older women,” says Haney, while Manley playfully gave it the Bathing Boomers moniker.

This third-age entrepreneurial act is all the more intriguing given the two creative types are far from typical businesswomen. Haney’s husband jokingly calls them “the Canadian Grace and Frankie,” a reference to the Netflix hit starring real-life friends Lily Tomlin, 80, and Jane Fonda, 82, that focuses on the funny — and often poignant — side of female aging.

Manley is a poet, professor and writer who was born in England, raised in Jamaica and settled in Toronto. If her last name is familiar, that’s because she is the daughter of Michael Manley, considered one of Jamaica’s most popular prime ministers, who was voted into power twice, once in 1972 and again in 1989. Her grandfather, Norman Manley, is a Jamaican national hero – a Rhodes Scholar, lawyer, First World War veteran and founder of the People’s National Party – who led the negotiations that ended in Jamaica’s independence from Britain.

Manley was raised mainly by Norman and his wife, Edna, at Drumblair, the family estate, after her parents divorced when she was two. Her grandparents were first cousins, one from the “white” and one from the “brown” side of the family, says Manley, who wrote about them in Drumblair, which won the 1997 Governor General’s Award for non-fiction. It was the first volume in a trilogy of stories about her influential and public family; she has described writing about her father as cathartic.

Haney, too, dug deep into her childhood for an autobiographical book following a successful career as a model and a stint as a host of a CBC fitness show. One of six kids, she was raised by a single mother in what she calls a slum, since razed, in the Alexandra Park neighbourhood of Toronto. She found her way into the story of her extraordinary childhood and unconventional parents when she started drawing. Her graphic book, The Mousehouse Years, was published in 2014, illustrations conveying the darker side of the story with some levity, particularly when it came to her father’s adultery and inappropriate lewdness.

Haney’s husband, Trivial Pursuit co-creator John Haney, helped out on the business side of the start-up as treasurer of Bathing Boomers. “We had no idea what we were doing,” says Haney, “but it was fun, so we kept at it.” They commissioned a local seamstress to make a prototype and went back and forth with tailoring changes. After they found a manufacturer, they produced just two styles: black leggings and dress-like tops that come in a patterned black, royal blue or red. Currently they are available online at bathingboomers.com in three sizes, which they call large (L), grand (XL) and great-grand (XXL), and plan to expand to smaller sizes once the world recovers from the COVID-19 pandemic.

Manley finds it funny that she became an entrepreneur. “I come from a long line of socialists, and we are all very bad at money. It is completely out of my nature. I’m a writer. You write until you drop or you lose your mind.” She also says Haney was the driving force. “I was happy to have this dream and be content with that.”

The product taps into a need, says customer Brenda Pritchard, 61, who was sporty all her life but now feels uncomfortable in conventional bathing suits. “We shouldn’t be judged by our bodies or made to cower in pants and shirts on the dock,” she says. “That’s too hot!”

An advertising and marketing lawyer, she worked on the ground-breaking Dove Real Beauty body image campaign, featuring unretouched photos of women of all sizes and ages but believes there is still work to be done to reverse the stigma around aging women. “We don’t want young women to feel self-conscious,” Pritchard says. “Well, we don’t want to abandon our 60-year-old women either.”

She wears her Bathing Boomers suit to receive company on the dock at the cottage and is delighted that she doesn’t have to scramble for a cover-up as soon as someone arrives or when she gets out of the water. “It is comfortable to swim in,” she adds.

So comfy that Haney, who was vacationing at a rented villa on Italy’s famed Lake Como a few years ago, decided to swim across the water to the luxury hotel Villa d’Este in an early prototype.

“I got out of the water and walked right up in my Bathing Boomers outfit and had lunch at the villa.”

It’s a long overdue gift for women of a certain age who are ditching the denial and diets and now can look at a glass of wine without seeing 300 calories in every pour. We are all on board for a concept that embraces aging bodies, bat wings and all.

A version of this article appeared in the July/August 2020 issue with the headline, “The Great Summer Cover-Up,” p. 22.

After a Devastating Flood Crippled Her Business, Arlene Dickinson Needed to Look Back to Move Forward