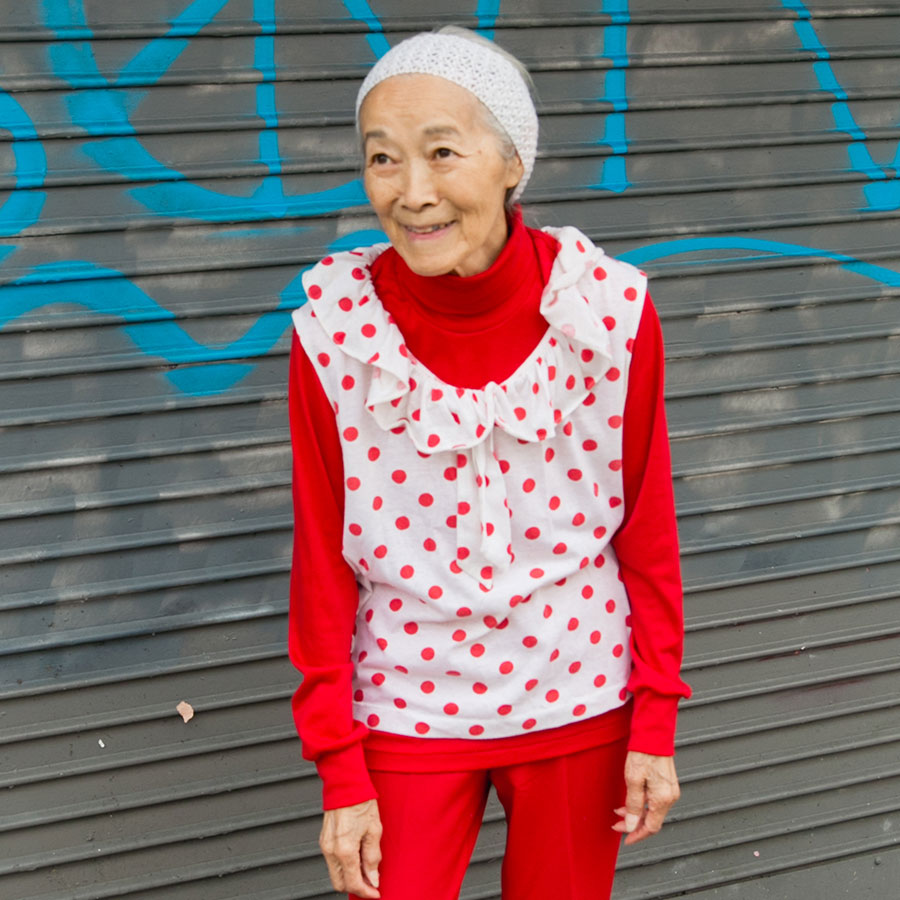 Dorothy Quock, a.k.a polka dot, is one of the hundreds of seniors featured in a new book documenting style trends and wisdom from Chinatown's older cohort. Photo: Andria Lo

You don’t typically glean fashion inspiration and longevity advice from the same source, but a writer and photographer duo from San Francisco are making the case that Chinatown is a one-stop shop for both.

Photographer Andria Lo and writer Valerie Luu have spent the last six years documenting the bold and eclectic style of Chinatown’s most stylish seniors, first on a blog and Instagram account and, most recently in a new book called Chinatown Pretty: Wisdom and Fashion from Chinatown’s Most Stylish Seniors. The two friends first discovered a unique aesthetic among the seniors during dim sum outings in San Francisco’s Chinatown.

“We’d be like, ‘Oh my God, who are these woman with these sun bonnets and layered puffy jacket? Where did they get their shoes?'” Luu explains. “So we had this really strong curiosity to learn more about the seniors.”

That curiosity lead them to Chinatowns in Oakland, Chicago, Los Angeles, New York and Vancouver. Approaching the fashionable seniors, often greeting them with “Pòh poh hóu leng,” which roughly translates to “damn grandma you look good,” the pair learned about the seniors’ outfits, history and connection to their local Chinatown.

Chinatown Pretty, the term the pair coined to describe the unique look, includes some of the latest trends, from their multi-layered pattern mixing — often seen in popular clothing retailers — to sporting runway items like fishermen vests.

“The aesthetic is kind of a patchwork of different colours patterns, eras and textures,” Luu says. “So it creates this unique blend of different eras and decades and, weaves in their immigration stories.”

One of the seniors featured in the book is Dorothy G.C. Quock, a.k.a Polka Dot, a regular on the Chinatown Pretty Instagram account with a penchant for customizing her clothing. Living up to her nickname, in one photo featured in the book Quock wears a polka dot blouse layered overtop a head-to-toe red ensemble.

For Quock, fashion is clearly a creative outlet. A scroll through the Chinatown Pretty Instagram account reveals her tendency to incorporate everyday items into her designs, including a vest made of quilted potholders and a hat adorned with gifted Chinatown ornaments. Her skill with a sewing needle, however, was born out of necessity and exploitation. The San Francisco native, who was born in Chinatown, worked alongside her mother in a Levi’s sweatshop, where hiding from labour law inspectors was a regular occurrence.

“They’d yell ‘baahk gwái lai le’ [the white ghost is coming] whenever a white guy came in and we would run into the toilet and hide until someone told us it was safe to come out,” she told Luu and Lo, admitting that those were scary times for the children.

In the book, they describe her as “a portal to what Chinatown is and was.”

Her connection to the community is present in everything she does. She currently works as a guide for Wok Wiz Chinatown, putting her lifelong connection to Chinatown to use. Outside of work she delivers groceries to her neighbours from her local food bank and is an active advocate for tenant rights.

Luu says that civic spirit is common among many of the seniors.

Vancouver Chinatown resident Xing Jun Ma, who wears a robin’s egg blue skirt suit she had custom made in China paired with a bright pink Dora the Explorer backpack, is a member of the Chinatown Concern Group — a collection of seniors who advocate for affordable housing by organizing rallies, lobbying officials and keeping fellow residents informed about new developments and city planning policies that impact Chinatown.

“Developers are trying to get rid of old architecture to build high-rises,” she tells Luu and Lo in the book. “We don’t want that. We want affordable housing.”

In addition to her political activism, Ms. Ma leads a tai chi group every morning and says she doesn’t feel accomplished unless she gets a class in.

Increasingly, Chinatowns are experiencing gentrification with upscale businesses and luxury housing displacing Chinese residents and businesses, an issue of concern for residents both young and old.

“One thing that was really special about Vancouver in Chinatown, that we’re staring to see a lot more of in other Chinatowns, is the intergenerational solidarity when it comes to activism,” Luu says. “They lobby for affordable housing together and I think that’s really beautiful that both generations are fighting and advocating for the Chinatown they want to see.”

The pair also asked many of the seniors their secret to a long life. Buck Chew, a 96-year-old former accountant and abacus master from Macau, China who boasts a collection of 40 ties, advised them to “Cook at home and eat lots of fresh veggies.” But most of the advice they gleaned from the seniors came from simply observing their lifestyle.

“I think they taught me how to really get out there and live an active life and engage with your community, not just as a senior, but as another urban resident,” Luu says. “They inhabit this place. They use public transportation, they’re doing outdoor free exercise classes in the park, they’re meeting up with their friends and sitting on park benches.”

Lo hopes that those lessons and the history they uncovered throughout the six-year project encourages younger generations to connect with their grandparents.

“Call your grandma and collect some family stories and ask them questions about their life,” she urges.

For Luu, the project gave her the opportunity to document the story of her step-grandmother, Anna Lee, who passed away last year before the book was published.

“She reminds us of Queen Elizabeth with her regal air,” Luu writes of the 94-year-old in the book. “She smiles, asks questions and is undoubtedly engaged. Not to mention, she is always well-dressed.” During a tour of her dress collection at her Burnaby, B.C. home, Lee was reminded of a particularly regal story.

Pulling out one of her cheongsams, a traditional Chinese dress, she recalled her challenging career transition from accounting to social services and the time Princess Anne visited the foster home she ran in Hong Kong.

“I wore my cheongsam so I wouldn’t have to bow like the English,” Luu recalls her saying in the book. “I’m Chinese.”

“As if it gave her some sort of immunity,” Luu adds. “Two months before her passing she still drove a car and held court at dim sum every day, walked around the mall for two hours afterwards and practiced yoga everyday.”

In an Instagram tribute, Luu admits she’s inherited some of her grandmother’s clothing, including a few of those cheongsams in case she ever encounters any members of the British Royal Family.

“In addition to her clothes, her spirit will continue on with me: how to make others feel considered, how to dress and eat well, how to live life fully,” the caption reads. “And good posture. She had impeccable posture.”