How Masks Are Upping the Sex Appeal for Older Bald Men 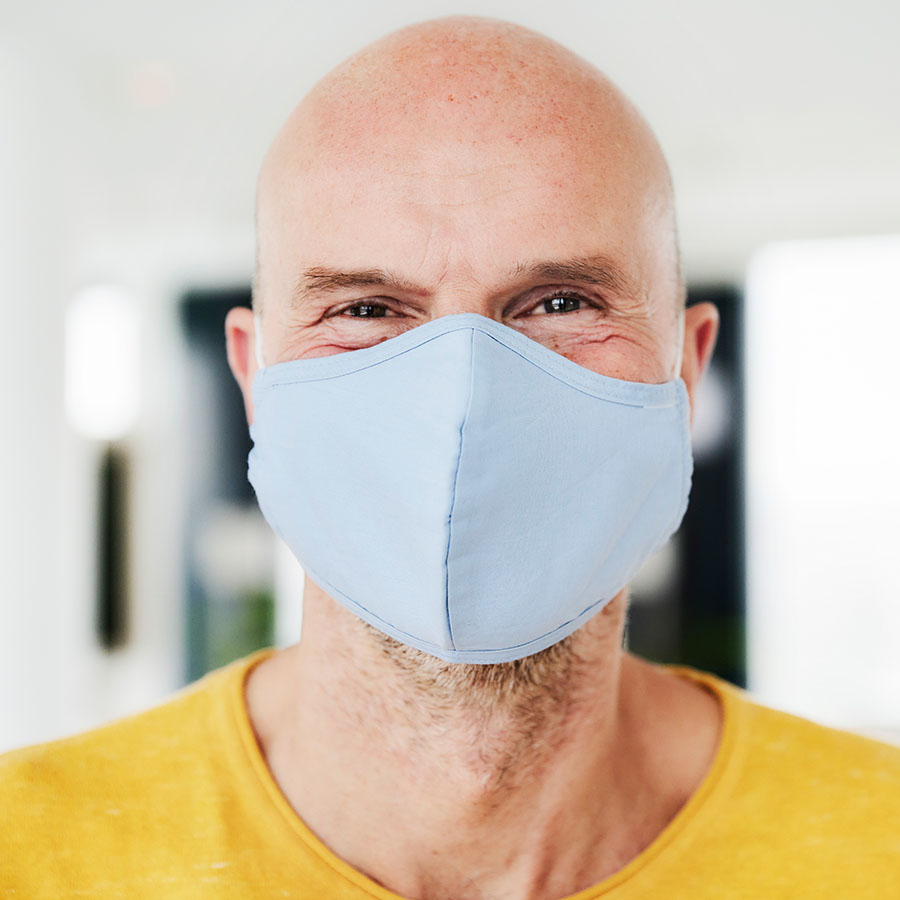 After noticing how well older bald men pull off a mask, one journalist decided to check his bias with a little investigation. Photo: GettyImages/Westend61

The other day, while weaving a shopping cart through my local Sobeys past an array of socially distanced, facially covered fellow shoppers, I was suddenly struck by a COVID-19–era truth that felt close to miraculous. A fashion truth, to be exact. Of all the physical phenotypes pushing carts past me, one group looked dramatically better in their surgical face masks than anyone else did: bald men. Exactly the sort of men who comprise a large proportion of male Zoomerdom (including — full disclosure — me). I actually stopped my cart in wonder. Who knew? Bald guys rock masks.

And not simply bald guys, but old bald guys. This is the miraculous part.  Further grocery research revealed to me that young bald guys wearing masks don’t really cut it. At best, they look like bank robbers in a Charlie Chaplin movie; at worst, like soft-boiled eggs in a cup, waiting for a really big spoon to come along and start cracking their skulls. The scalp skin that shows above the ridge of their mask is too smooth to convey character or narrative. It’s like trying to read a blank page. But with old bald guys, what shows with a mask is a perfectly nuanced quantity of wrinkles and hollows, not enough to be alarming the way the full facial effect can be but just enough to give you a sense of who their owner might be.

The secret is in the eyes. I know this not from looking in the mirror, but from my wife. Ever since she started letting me go back into stores again to shop, she has complimented me on how I look more than she has in years. “How come?” I asked her one day. “It’s the mask,” she said. “It brings out your eyes.” She was referring to colour, not bulge, but she had a point.

In 2016, Men’s Health magazine conducted a survey of 200 women, asking them to identify the first thing they noticed about male strangers they passed in the street. The majority answered: their eyes, followed by their smile. Smiles are obviously a non-starter in mask-wearing time. So the eyes above the rim of the mask are all you have to go on with someone you don’t know; doubly so if there’s nothing else above the eyes — like hair — to distract your focus. The eyes of masked old guys with hair might look merely old, but masked old bald guys’ eyes, I contend, also look ironic in a somehow secret way. They seem to smile.

Far-fetched, you say? Once again, there’s research to support the claim. In 2013, a team led by Dr. Susanne Quadflieg, a psychologist at the University of Louvain in Belgium, did a study of people’s response to the presence in other peoples’ faces of the Duchenne marker — known to most of us as crow’s feet. Previous surveys had shown that crow’s feet, the wrinkling that appears at the corner of the eyes as we age, were associated by observers with an increased perception of amusement, authenticity, spontaneity and intensity in the smiler. Quadlieg’s study showed, further, that when crow’s feet were present, many observers also scored the smiling people higher in terms of attractiveness, intelligence, dominance and trustworthiness.

So, to summarize, if you’re old, it turns out that people can in fact tell if you’re smiling when you’re wearing a mask, thanks to your crow’s feet. And because this perception in turn leads people to see you as more intelligent, trustworthy and potentially entertaining, it follows that wearing a mask even when you don’t need one is probably not such a bad idea for older people, especially if you’re older and bald — which, remember, induces observers to be even more focused on your eyes.

Can we test this hypothesis? Sure. Take four of the most famous bald leading men of TV and movie screendom: Yul Brynner, Telly Sevalas, Samuel L. Jackson and Patrick Stewart. Four guys known for being older and hairless and, yes, sexy. Now put surgical masks on them. Is there not an extra frisson added to their allure, what you might call the wise old surgeon look or maybe the wise old patient look? No? Then let me catapult you back in time to a black-and-white television show in the year 1962.

The show was Ben Casey, the iconic medical drama that ran from 1961 to 1966, starring Vince Edwards in the title role. Edwards, who played the star young neurosurgeon at County General Hospital, was brawny and dark and had a lot of hair, especially on his head and forearms. His mentor, the 70-ish chief of neurosurgery Dr. David Zorba, was played by Sam Jaffe, also the owner of an impressive head of hair — in his case a crazy blond aura that presaged Gene Wilder’s. It was Jaffe whose patient voiceover translated the extremely cool blackboard drawings that appeared in the show’s titles: “Man, Woman, Birth, Death, Infinity.” And it was Jaffe who coined the iconic phrase “Ben Casey, Ben Casey,” always followed by a wry little lecture to Dr. Casey about matters medical and philosophical. I was 13 at the time, as were my close group of half a dozen smart-ass friends, and we loved the show almost exclusively because of Dr. Zorba. Every time he said “Ben Casey, Ben Casey,” we were ecstatic. It struck us as the greatest straight line ever uttered. We spent the show eating Oreos and inventing our own punchlines. Our favourite: “Ben Casey, Ben Casey, you’re cutting too deep, you’re scratching the table.”

When it came to the medical mask, it was Ben we most often saw wearing one in surgery. But his mask made him look even more intense and humourless than usual and did nothing for his charisma. He was just too young. We were waiting for the rare occasion when Zorba joined him in the O.R. and donned a mask himself. When he did, he was always wearing not just a mask but also the classic snug surgery cap, which totally hid his wacky hair and rounded his skull, momentarily transforming him into the original homo vetus calvus sapiens larvatus (wise old masked bald guy). His eyes lost their zaniness, narrowed and gentled; at their corners, the Duchenne marker bloomed. He leaned close to better see the procedure being performed by the gloomy hotshot beside him and started to say, “Ben Casey, Ben Casey …” In a suburban Toronto rec room, six recently bar-mitzvahed jerks leaned forward, too, hoping against hope that just this once, the chief of neurosurgery at County General would finally utter our punchline.

He never did, of course. He was 71 at the time, my age now, and he was pseudo hairless. And he was the coolest guy to ever wear a mask.

A version of this article appeared in the Feb/March 2021 issue with the headline “Masked Marvel,” p. 24.