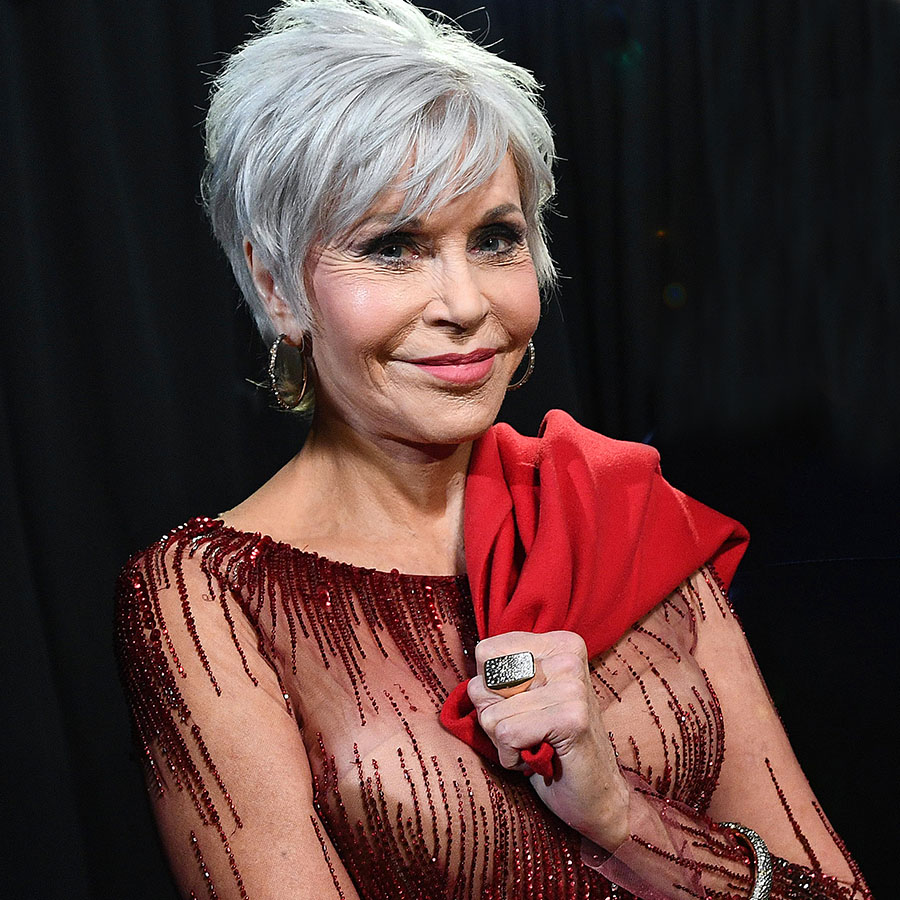 Jane Fonda, seen here at the 92nd Academy Awards where she first debuted her silver pixie cut, said in a recent television interview that she was "so happy" she let her hair go grey. Photo: Richard Harbaugh - Handout/A.M.P.A.S./Getty Images

Don’t call it a pandemic trend. Grey hair, whether au natural or accentuated with silver or other tones, is here to stay.

Recently, it was model-actress Andie MacDowell, 63, sporting a mane of wavy pewter to match her bead-embellished gown on the Cannes Film Festival red carpet.

Of course, she isn’t the first celebrity to embrace her natural grey.

Just a little over a year removed from debuting her silver pixie cut at last year’s Oscars, Jane Fonda said she was still loving her grey.

“I tell you, I’m so happy I let it go grey,” the 83-year-old Oscar-winning actor told Ellen DeGeneres during a remote interview on the host’s show. “Enough already with so much time wasted, so much money spent, so many chemicals — I’m through with that.”

For Allison Janney, it took a few pandemic roots coming in and some inspiration from Helen Mirren to swap her longer dyed hair for a grey pixie crop.

The 61-year-old Academy Award-winning actress told People TV’s One Last Thing that she had always been “very brave” with her hair but said the decision came about when her natural grey started showing through during the first coronavirus lockdown.

“It started out with just COVID choices, you know,” she said. “I was in Ohio for five months of the pandemic. My natural colour started growing in, which is grey. And then I thought, you know, I’ve always wanted to cut it off and do a Helen Mirren thing. I just wanted to try.” For Helen Mirren, 76, embracing her grey hair wasn’t about trying something new or taking a stance. In fact, the celebrated actress, who’s been showcasing her silver in a variety of styles for years now, wanted to try less.

“I did it because I’m lazy. Honestly, I’m so lazy about my hair,” Mirren told People in an interview last year when asked about her switch to grey. “It’s a lot of work and as wonderful as many hairdressers are, I don’t want to sit in a salon for hours. I just can’t be bothered with that.”

Of course, the empowerment that comes along with that “grey-hair-don’t-care” attitude isn’t lost on her.

“I think women were just so terrified of having white or grey hair because it immediately put them into a different category,” Mirren said. “And of course, you are in that age group. I’m sorry, but you are! So, why not just embrace it, go a long with it and welcome it. Make it a positive thing as opposed to a negative thing.”

However, that positive spin can have a lot to do with the cut.

This is where the short crop comes in. Nothing shears years off more quickly than a sharp cut. But while the pixie and short bob are two styles popular with older women, there are other short cuts that offer a fresh and modern update.

Before you take the short route, you should consider how low you want to go and other factors, such as the upkeep. Yes, short hair is low maintenance to a certain point, but if your hair grows rapidly you might need frequent trims to keep it looking fresh. When you have lengthy locks, a bad hair day can be saved by pulling it all into a ponytail. A bad hair day with a short cut is for all the world to see — unless you wear a hat.

Surprisingly, shorn looks can be versatile. It’s a popular notion that you can’t do much to change up a short cut, but by combing it back, changing the part or playing with texture and volume, you can pull off looks from sassy to sexy, sophisticated to simply chic.

For a little inspiration, we take a look at how seven stars over 60 made short and silver look spectacular.

This celebrated actress is no stranger to the red carpet, having collected an Oscar, two Emmys and two Golden Globes throughout her career. But Bates turned more than a few heads at last year’s Golden Globes with her strikingly youthful hair style. Close cropped, parted on the side with a retro-looking upsweep in front, it was simple yet looked sharp and utterly cool. It was the perfect crowning touch to her velvet tuxedo.

Model, nutritionist, author and mother of Tesla billionaire Elon Musk, seen here at the GQ Men of the Year awards in Hollywood in December 2020, is proof you can never be too old to show an edgy, punkish side, if even for just one night. Musk has a short undercut at the sides with longer hair swept up at the top into a pompadour, which gives it a rocking look. Combing it down to cover the short sides would offer a softer look.

She might have played the revered and regal grandmother in the blockbuster Crazy Rich Asians, but at last year’s Golden Globes Lu was rocking a hair style you might find on a teenage heart-throb from a boy band. It looks like a pixie cut, but styling it with some volume at the top — simply by spiking it up — makes it look playful and fresh.

Swanky velvet, statement earrings and a cloud of tousled white hair made this celebrated actress one of the fashion winners on the red carpet at last year’s Golden Globes. And her hairstyle served as a reminder that short hair doesn’t always have to fall flat.  This playfully messy style has texture and volume — achieved with hairspray or styling mousse — and can make fine, grey hair look full and vibrant.

Trailblazing model of the ’60s and ’70s, muse, talent manager and long-time activist for diversification in the fashion industry, this Brooklyn native has seen many hair trends come and go. At the 2019 Glamour Women of the Year Awards in New York City in November 2020, Hardison went back to her roots, embracing the texture and colour of her natural hair. It looks eternally fresh.

You can always count on this award-winning actress and L’Oreal Paris spokesperson to bring full-wattage glamour and sex appeal to any red carpet. And Mirren’s not afraid to make a hair statement, sporting rose pink hair at last year’s Cannes Film Festival and also at the 2013 BAFTAs, reportedly for no other reason other than she felt like having some fun.

At last year’s Golden Globes, pictured above, she embraced her grey in the most stylish way with a side part,  one side swept behind her ear and the top combed forward to give bangs for a look that was sophisticated without looking stiff.

An actress  in her native China since she was 16, Shu-zhen made her American film debut in the 2019 Sundance Film Festival hit, The Farewell. Besides her luck at landing a meaty role as a septuagenarian in her first Hollywood film, Shu-zhen is also lucky to have thick hair. With tight curls framing her face, she looks regal, not unlike another woman of true royal bearing, Queen Elizabeth II. Some might say it is a matronly style, but it is also elegant and timeless. Besides, it also depends on what you wear – the scarlet lipstick and blood red velvet dress hardly makes her look mumsy.

The super-short pixie is popular with older women who want a low-maintenance hairstyle. But it can be so much more, as Curtis proves. She has worn her shorn, grey hair slicked back for a sophisticated look, as she did at the 2019 Golden Globes. Seen above at the 2020 National Board of Review Annual Awards Gala in New York, her hair is breezily side-parted with a few spikes casually pulled forward for a look that’s sharp, sexy and simply sizzles with style.

7 Celeb-Inspired Hairstyles for Women Over 50

9 Short Hairstyles For Women Over 50