Get Ready for the Season of Exposure 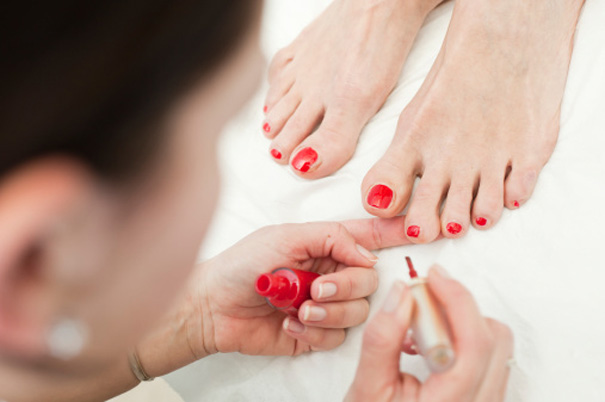 No, it’s not the song your grandchildren sing.

It’s the to-do list for getting yourself together, as a woman of a certain age, for flesh-baring weather.

Let’s start from the bottom up (though bottoms of a certain age are generally not bared unless required in specific circumstances….)

Now that leprosy has been cured, there is nothing uglier on the human body than feet left over from winter.

A pedicure is de rigueur before donning sandals and, yes, even before wearing peep-toe flats or heels. No toe nail should be exposed in public before it has been thoroughly cleaned, trimmed, filed and polished or at least buffed. Pick a silvery or pale pink polish most days. Avoid brights or darks unless your pedicure is perfect. As for nudes, what’s the point? You can do this yourself at home or you can get someone to do it for you.

The scene in Bull Durham when Kevin Costner polishes Susan Sarandon’s toenails hardly qualifies as even tame erotica these days and Sarah Ferguson has long been forgiven for getting caught on camera having her toes sucked but there’s still something interesting about having somebody else caress and groom your feet.

And speaking of Bull Durham, before you strap into your sandals, do make sure your heels don’t look like scuffed and dirty baseballs. No pedicure? Wear sneakers.

Sigh. Not much we can do about them except moisturize. Also, be super cautious with the fast tanners which tend to lurk in the creases of mature knees. The ultimate solution for mature knees? Capris.

Shoulders themselves are not a major problem. The problem is that shoulders are attached to upper arms.

The part of the arm adjacent to the arm pit is to the shoulder what Crimea is to Ukraine. It dangles and causes trouble.

Whether or not it’s okay to wear tops with straps, such as camisoles or sundresses, and go sleeveless when one’s flesh is less than firm is an issue of heated debate, especially when it’s hot. Sometimes it’s best to just do what Putin does: cover up.

We have to thank the cosmetics industry for coming up with BBs, or CCs or whatever alphabet letter they’re up to now. (Did I miss AAs? Oh, wait, those are batteries.)

These lightweight tinted moisturizers usually have a 15 to 30 SPF built in. So you don’t even need to worry about putting sunscreen on your face.

Just remember to spread the cream right up into the hairline, down to the bottom of the cheeks and on your chest to protect from sun damage.

Isn’t it wonderful that we no longer have to smear ourselves with greasy oil and white stuff and look like a mime?

As for hair, since many of us get blonder as we get older, it’s wise to use a spray that prevents the sun from turning it into the fluorescent hue of a lemon-lime Slurpee.

And whatever happened to wearing silk scarves folded into a triangle wrapped around the head and tied under the chin to protect the hair from sun and wind? Everyone from Princess Grace to Queen Elizabeth to Jackie O was photographed wearing them.

When they’re Hermes, nobody calls them babushkas.