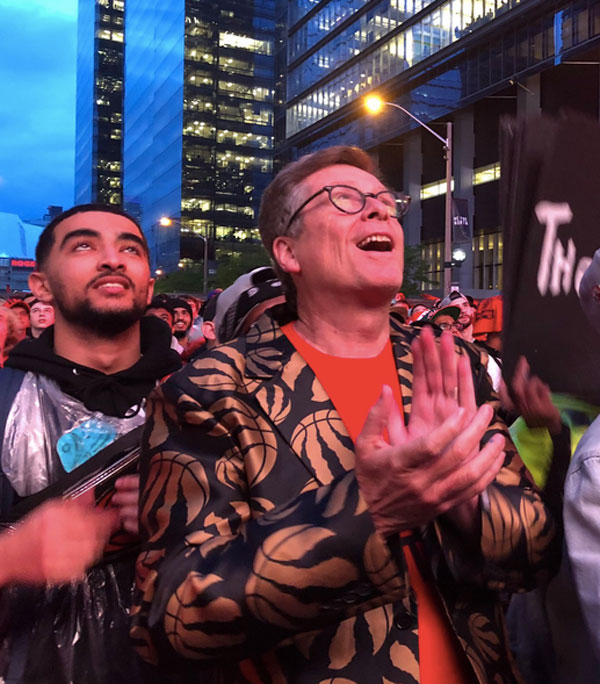 The occasion was historic. And I don’t mean the Raptor’s championship and parade.

John Tory in a sartorial smackdown with Don Cherry?

The former Ontario Tory leader in a haberdashery hack with Drake?

After being gifted the claw-print blazer, he was soon seen strutting and glittering through the streets of his city with, believe it, a jacket emblazoned with the Raptors logo in gold— the sharp talon and the basketball.

Did I mention that it was in gold?

It wasn’t just a single, solitary Raptors logo in gold. There were logos splattered all over his jacket! Dozens of them. In gold, reflecting the soon-to-be-summer sun on this most satisfying day of celebration.

“It’s now become this thing where I can’t take it off. It’s become a requirement that I wear it,” the mayor told the Toronto Star.

Considering the occasion, should we forgive the Mayor for trying too hard?

Or should we congratulate him for joining in the fun with his hokey jokey jacket?

After all, we don’t know for sure whether he was wearing the jacket because he was trying to be cool.

Maybe he was just trying to be warm.

Or maybe he thought an ugly black jacket with multiple gold logos was what fashion dictated on this occasion, like wearing an ugly sweater at Christmas.

Because, really, just how, if you’re the mayor at the parade, do you mark an occasion as improbable and exhilarating as Toronto winning the NBA championship?

Wearing a jacket in awfully bad taste is obviously a slam dunk.

Now, may we, the citizens of the home of the world’s best basketball team, respectfully suggest to our mayor that it’s time to put away the ugly bling jacket, to decommission it,  to hide it from sight, to let it RIP.