Horticultural Heaven: Why Don’t We Do it in the Nude? 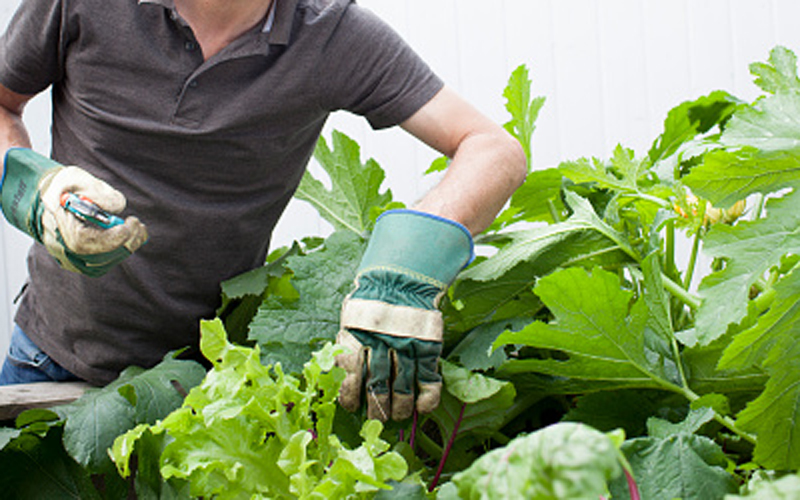 As a rickety-backed, finger-blistered, knee-knackered, weed-whacked veteran of the Backyard Wars, I have considerable experience and some strong feelings about the art of coaxing plants out of the ground.

The way I see it, classic gardening breaks down into two basic camps. You have your Chemical Warriors over here … and you have your Holistic Hippies over there.

Chemical Warriors are the Take-Charge guys. These are the ones who carpet-bomb their plots with fungicides, insecticides, rodenticides, defoliants, fertilizers, revitalizers – everything this side of napalm – in order to insure that only vegetables and ornamental plants will thrive.

Advantage: you destroy weeds and annihilate creepy crawlies. Nothing other than your vegetables and flowers will grow. Downside: eating those vegetables or sniffing those flowers may cause you to spontaneously trigger Geiger counters and/or glow in the dark.

Then there’s the Holistic Hippie approach.

No chemicals. No invasive rototilling. In place of weeding, you emit Good Vibrations. You must also mulch meaningfully, preferably while humming the chorus from the Beatles song “Let It Be.” Instead of battling nature, you embrace it, sharing your bounty with all the other beautiful and wonderful-in-their-own-way creatures of the natural world.

Disadvantage: rabbits, corn borers, slugs and weevils are not conversant with the lyrics to “Let It Be.” There will be no bounty from your garden. Unless you count bumper crops of cocklebur, purslane, sow thistle and crabgrass.

Do I sound jaded and pessimistic? Not at all – I’m in Horticultural Heaven. I’ve discovered a third approach to crop husbandry that puts the other two … in the shade, as it were. I call it WWOWD. What Would Old Wives Do?

Let’s face it: there was life – and gardening – long before the science of agriculture showed up in its lab smock. Our ancestors, crude and unlettered as they were, planted and harvested crops for thousands of years before Monsanto and Ciba-Giegy horned in on the action.

The human race survived. Those old gardeners must have done something right.

They did. They kept it simple. Consider the instructions on the back of a modern seed packet: “Sow seeds five mm deep, 15 cm apart six to eight weeks before the last frost. Aim for a PH range of 5.5 to 6.5 in full sun to light shade…”

Contrast that with the advice from my copy of Old Wives’ Lore for Gardeners, which nails planting in two lines of easy-to-remember doggerel. The book suggests you sow your seeds thusly:

One to die and one to grow”

I can deal with instructions like that.  And here’s how my crone cultivators handle pest control:

“If it moves slowly, step on it; if it be swift, leave it. It will probably eat something else.”

My geriatric gardening girls are brim-full of cabbage-patch craftiness. Old tea leaves? Camellias love ’em. Banana peels? Chockfull of calcium, magnesium, sulphur and potassium. Drop the peels under your rose bushes, cover with a thin layer of dirt and stand back.

But there’s one piece of Old Wives’ lore that frankly freaks me out.

“The best husbandmen,” says my handbook, “would have the seedsman, under a waxing moon, be naked when he sows them, and in sowing to protest that this which he doth is for himself and his neighbours.”

Translated into modern English, it would seem that I’m being encouraged to garden nude, in the middle of the night while shouting loudly that I’m doing it for the other folks on my block.

I dunno about that. I think the neighbours are still a little touchy about my 3 a.m. acapella rendition of “Hey Jude” last New Year’s.