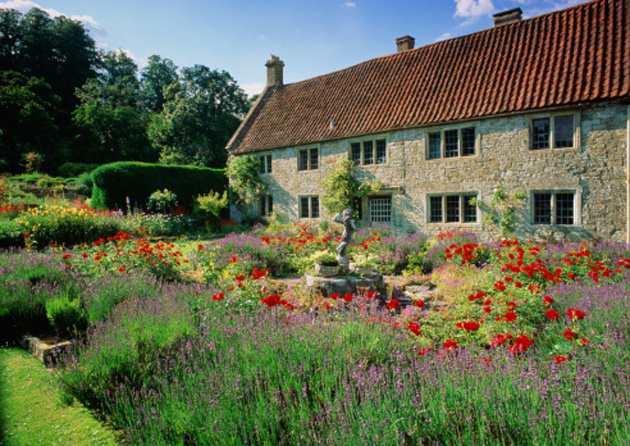 Create a traditional picture-perfect English garden without paying a king’s ransom – or sacrificing too much of your precious relaxation time.

Who can resist the mystical charm and romantic aura of an English cottage garden? An abundance of wisteria, roses climbing over fences, stone bird fountains, flower trellised arbors, and pebbly secret paths create a whimsical retreat even in the most modest city garden.

Traditionally, the cottage garden had no formal plan, but consisted of a straight path leading to the front door which passed through lawless borders overflowing with a riot of colourful plants. The plants grew in a tangled profusion and often included tall perennials, herbs, vegetables and cutting flowers.

One of the most famous English cottage gardens was designed by the French Impressionist painter, Claude Monet (1840-1926). During that time, art and literature exerted a strong influence on the historical course of garden design in Europe, illustrating how life truly can imitate art.

Initially, however, the English cottage garden was less about evoking emotion than fulfilling such utilitarian needs as growing vegetables, fruit, medicinal herbs and flowers, as well as raising poultry or pigs. Three or four hundred years ago, cottage gardens were not the romantic retreats we see today, but a means for peasants to support their families. Crops and wildflowers seeded themselves haphazardly, leaving little space but for meandering paths between planting areas. 1. Be creative with architectural elements.

Many of the traditional architectural elements of an English cottage garden such as trellises, garden benches, antique wheel barrels, stone planters, porch swings or other wooden or metal decorations can be found inexpensively at garage and estate sales or even in the trash. And with a little creativity, arbors and wattle fences can be constructed with fallen tree branches. Wildflowers offer colourful and delicate flower displays combined with the hardiness of a weed. Some wildflowers do well in both periods of drought and in soggy soil. Seedlings should be planted in June when there is no longer any danger of frost. Many breeds of wildflowers, as well as moss, ferns and other greenery, can be easily transplanted from nearby woodland areas or from a friend’s garden. 3. Plant plenty of perennials to save the major annual re-plantings.

Perennials also self-seed, allowing the garden to continue to thrive and grow over the years. 4. Go with roses for a classic feel.

Consider the “wild” rose varieties from climbers to ground ramblers available in many garden centres. Like wildflowers, these roses are heartier and can better withstand drought. Don’t be afraid to plant seeds close together as this creates the effect you are looking for. Plants are repeated in a cottage garden, but are not set out in rows. Instead, plant feathery plants among spiky ones, bold leaf plants amidst delicate ones, and allow plants to self-seed with abandon. And such closely packed-in plants offer a benefit beyond esthetics: you will have little weeding to do, as few will have space to grow. By offering a food and water source, you’ll attract birds, butterflies and other garden visitors. (If you wish to discourage raccoons, however, avoid putting up bird feeders. And to fend off another unwanted garden visitor, mosquitoes, consider planting citronella.) 7. Create a sense of whimsy.

If you’re a city dweller or if another cottage is situated nearby, install arched gates, trellises and plant climbers such as clematis, ivy and snow peas for a sense of lushness and privacy. And remember that a cottage garden abounds with whimsical secrets such as violets hidden under an old wooden wheelbarrow or a sweetheart rose growing in the tiptop of a bottlebrush tree.