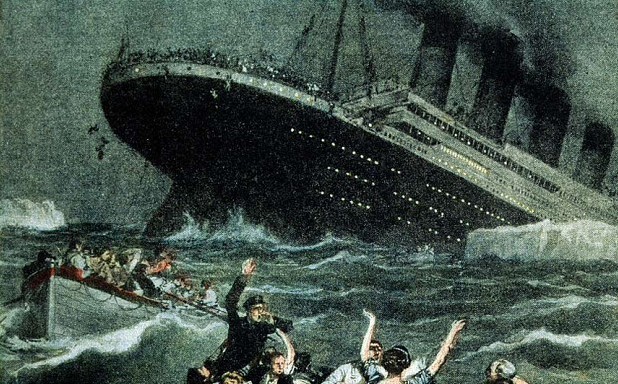 Think of it as a feud ala West Side Story but involving nautical history buffs – some of whom take their craft waaaay too seriously.

Case in point – this quote, from a story in Britain’s Telegraph newspaper: “I am 42 years old and I feel quite embarrassed that I am basically being bullied. You read about people getting bullied on the Internet, but it is usually children. You don’t expect it among Titanic groups.”

True, no one ever does expect it among Titanic groups. This is probably because most don’t realize the groups exist. But they do, and those who belong to them even have a term to describe their hobby: Titanoraks. According to the Telegraph story, the person who uttered the above quote – a Titanorak from England named Jonathan Smith, founder of the online Olympic Class Liners (OCL) group and media go-to guy for Titanic info – unwittingly sparked a feud with people affiliated with a similar group, Lovers of the Ocean Liners (LOTOL).

In short, Smith watermarked hundreds of Titanic-related postcards and pictures that appear on his website to prevent thievery and even reprinting by nefarious types. Apparently, some LOTOL folks took issue with the watermarks, thinking Smith is declaring himself owner of the images. You’d think a simple “No, that’s not what I am implying” would put an end to it, but alas this is a jumpy bunch.

Allegations of plagiarism on Smith’s part about an article focussing on anchors (If you’ve read one article about anchors, you’ve read them all. Am I right?) and other no-no’s circulated on various nautical message boards. His academic and Titanic expert status have been questioned, threats of harm at the hands of thugs have been levied, and he was even accused of “abusing” and “molesting” fellow Titanoraks. Wow.

“We all have our own views about the ship and things can get a bit heated,” said Smith, “but it has really got out of hand.” You think?

Smith points to LOTOL member Michael Crowe, 66, as one of the perpetrators. Crowe, for his part, denies making any of the most serious accusations, and that he never threatened violence.

The police, not surprisingly, are now involved.