Inca Children, Sacrificed to Volcano Gods, Were Fed Drugs and Booze Before Death 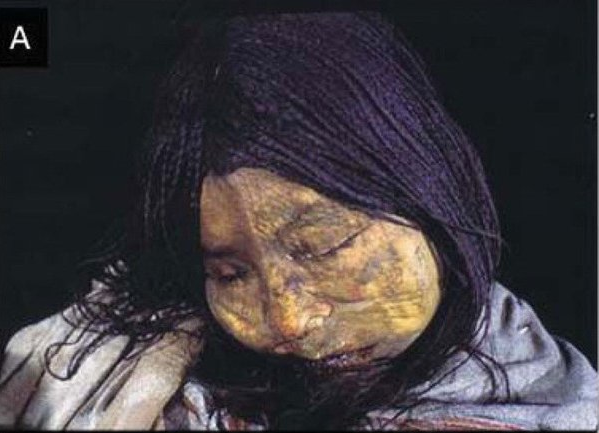 In England, they found a lost king buried beneath a parking lot. In Siberia, it was a 39,000-year-old wooly mammoth in an icy swamp. In Poland – the graves of suspected vampires. Bizarre? Sure. But that’s nothing compared to what was unearthed atop the Andes mountains.

That’s where three Inca children were discovered in 1999, nearly perfectly preserved in frozen tombs, drugged and abandoned as sacrifices to the gods who called Llullaillaco Volcano home 500 years ago.

According to reports, including one from the Los Angeles Times, “Two of the children, a girl and a boy, were about ages 4 to 5. The third, a 13-year-old girl known as the Llullaillaco Maiden, had been treated differently from the other two.  She had long hair in many tiny, tight braids, wore a feather headdress and held a wad of coca still clenched in her teeth.”

Scientists analyzed hair samples from each, with the Llullaillaco Maiden, also dubbed the “Ice Maiden,” offering the most intriguing results. By isolating chemicals in the hair, researchers could determine the maiden’s diet going back up to two years. The results showed a significant rise in quality of food, due to a rise in status, most likely, and traces of drugs (cocaine from the coca leaves) and alcohol, increasing and peaking close to the day she died. The younger children’s hair contained traces of the same substances, but not nearly as much as the maiden’s.

So how did the children end up in tombs atop the mountain with drugs and booze in their system? Blame it on capacocha – the ritual sacrifice of children (symbolizing purity), “during or after important events, such as the death of the Sapa Inca (emperor) or during a famine.”

Dr. Andrew Wilson, who headed the study of the Inca children published this week in the journal Proceedings of the National Academy of Sciences, told The Daily Mail, “We think it likely that the Maiden was selected for sacrifice 12 months before her death, after which her treatment changed, corresponding to the sharp rise in coca consumption. She was then probably involved in a series of rituals, involving consumption of coca and alcohol in the build up to her sacrifice…The fact that in her final weeks the maiden shows consistently higher levels of coca and alcohol use compared to the younger children suggests there was a greater need to sedate her in the final weeks of life.”

He also told NBC News that the sacrifices were likely “designed to create this climate of fear and to basically help build … new allegiances” within the Incan empire.

There was no sign of foul play on the bodies, so they were likely supervised by Incan priests until they succumbed to the elements.