Woman Builds Herself an Artificial Leg…Out of Lego 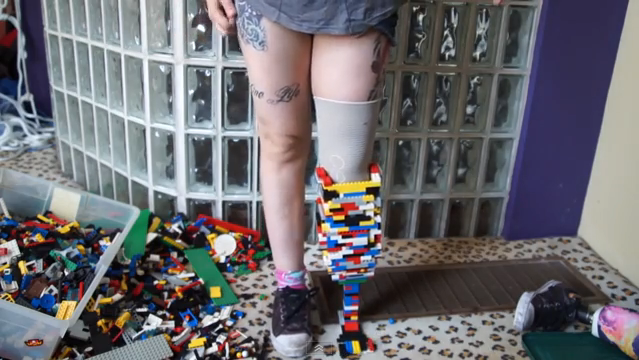 What did you build with your childhood Lego set? For me, it was a tower – always a tower, each one taller and infinitely cooler than the one before. It’s obvious now that I possessed absolutely no imagination when it came to architectural design. “Just pile one on top of the other,” I’d encourage myself. If I’d owned an architectural firm back then, I’d have called it Towers Only Inc., and the motto would have been “Build up.”

Luckily, when it comes to creative engineering, not everyone is as dull as seven-year-old Mike. Take Christina Stephens, a 31-year-old occupational therapist who had her foot amputated after her car fell from a jack and landed on it while she was doing some maintenance work.

Not one to wallow in self-pity, Stephens took to YouTube and began a video series called AmputeeTO to spotlight issues faced by amputees – from biking to bathing to walking and gardening.

According to the Associated Press (AP), a conversation with friends about various types of prosthetics inspired Stephens to film her most attention-grabbing video yet: Stephens built her own prosthetic leg…out of Lego blocks.

“The video is sort of a metaphor for rebuilding your life after a disability,” she said in the AP story. “But you can’t really walk on it.”

Walking on it, however, wasn’t the point. The video’s gone viral, and continues to raise awareness for Stephens and her cause.

“Part of what I want to do with my videos is de-stigmatize amputation and make it less scary,” Stephens says. “I thought my Legos video had some viral potential, but I had no idea it would explode like it did.”

Amazing. I wonder if she’s ever considered building Lego towers….