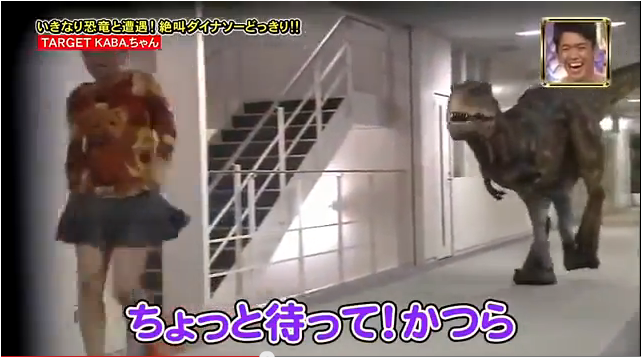 It’s The Office meets Jurassic Park – a velociraptor runs amok (as they tend to do) terrorizing a Japanese workplace as frantic employees flee in terror. It sounds like the plot of a film akin to Sharknado, but this tale is real…sort of.

The video above is actually a Japanese game show prank gone viral, where an unsuspecting victim walking down a drab grey office hallway is startled by the screams of their escaping co-workers. Before the victim has time to think, a person in a very large, very angry (and impressively realistic) velociraptor costume peer around the corner of the hallway and makes a mad dash toward them.

Caught up in the hysteria, and without time to consider the fact that dinosaurs are extinct, the victim bolts back down the hallway with hilarious results. The above video sees the victim literally lose his wig, while two more unsuspecting souls fall prey to the prank at this link.

The entire ordeal only lasts a few seconds, but once they catch their breath you can bet these employees will never complain about a mundane Monday morning at the office ever again.