British Boomer Runs Across U.K. with a Fridge on His Back 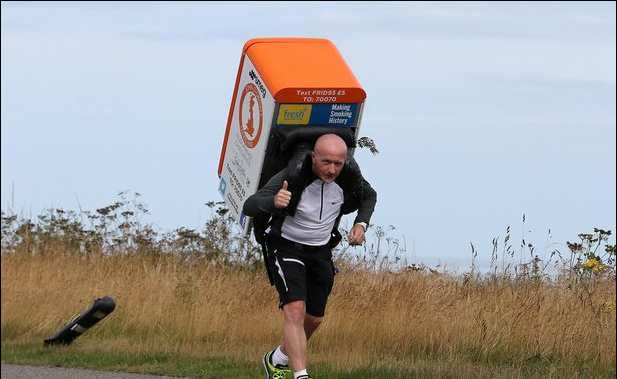 They call him Tony the Fridge – and for good reason. The 49-year-old marathon runner (real name Tony Phoenix-Morrison) completed a 40-day, 1600 km run “from the top of Scotland all the way down to the bottom of England,” or, to be more specific, from the north Highland Scottish village of John o’Groats to Land’s End in Cornwall, near the southern tip of England…with a 93lbs. fridge strapped to his back.

“I wanted to try something so hard that nobody could be certain of its outcome,” Phoenix-Morrison told the BBC. “All I could do was try to prepare myself physically and mentally as best I could.”

The Fridge was running, so to speak, as a means of raising funds for cancer research at the Sir Bobby Robson Foundation.

The literal fridge represented the weight of cancer on those touched by it, was strapped to Phoenix-Morrison’s back for every leg of the run, amounting to about a marathon a day.

“I was in so much excruciating pain and there were a few times I said I was done to my wife,” The Fridge told the U.K.’s Mirror newspaper. “I was broken but there were people with banners, chanting my name and shaking my hand all through the run so I just had to take it one step at a time…I was in tears by the end from a mixture of pain and pride. It renews my faith.”

The run, not surprisingly, reportedly left Phoenix-Morrison with possible damage to his spine as well as hip injuries, but his spirit remains fully intact.

“That was the greatest moment of my running career,” he said, “and if that was the last time Tony the Fridge has a day out, then what a day.”