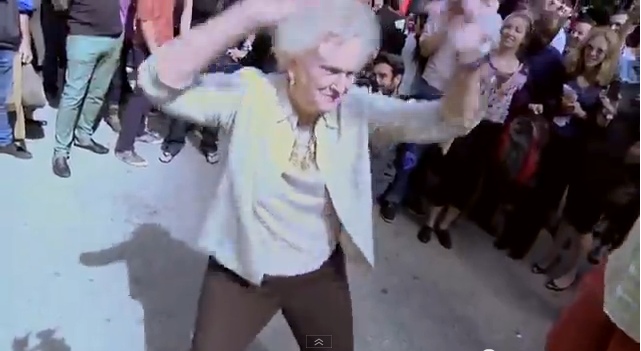 Trust me: like you, the last thing I want to read about is twerking – the hip-jerking dance craze made popular by Miley Cyrus at this year’s MTV Video Music Awards. But if there’s anyone who can make twerking worth a few minutes of your time, it’s Joan Wind.

Wind, a 73-year-old New Yorker, headed to Macy’s to buy bedding on Wednesday when she happened upon a Guinness World Record attempt to gather the most people twerking together at the same time. Not the most illustrious record, sure, but nevertheless more than 300 people showed up to join in – including Wind, who made the split-second decision and ended up stealing the spotlight.

“I never really had to shake my booty that much,” a joyous Wind says in the video above.  “Two or three years ago, I saw it but I never thought I could do it. I tried it at home in my mirror in my bedroom and I said, ‘Oh, it’s shaking very good.’”

If you can get past the creepy guy in the coral cargo shorts dancing next to Wind, you’ll see why she attracted a crowd and had most of the 357 other twerkers in attendance cheering her on. The group ended up setting the record, and Wind, when asked what she’d say to people who don’t approve of her busting a move, offered up a perspective that epitomizes the idea that you’re only as old as you feel.