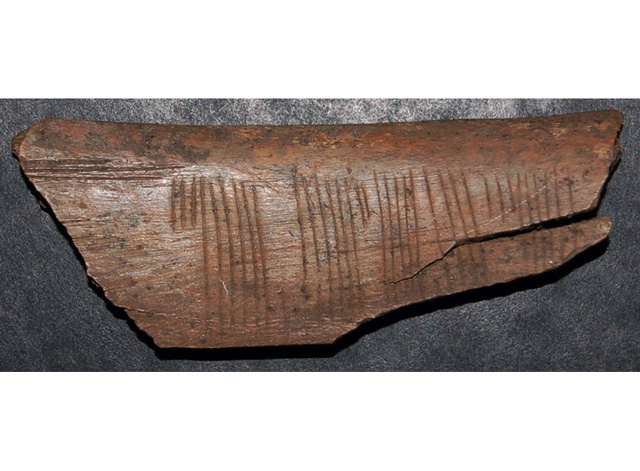 Sure the Vikings were brutal warriors who plundered and pillaged their way across a large chunk of Europe and Asia, but even they couldn’t have survived without one pivotal item: love. And battle-axes. They definitely needed those battle-axes. But also love.

Need proof? A Norwegian researcher decoded a 900-year-old Viking message that had previously left experts stumped. The message: “Kiss Me.”

Resembling the claw marks of a large beast on a piece of lumber, the note is thought to date back to around the 11th century. It’s written in the runic code Jötunvillur, something of a secret Viking alphabet. The researcher who cracked the code, University of Oslo runologist Jonas Nordby, says he decoded the note after suddenly noticing a pattern in the markings.

“Many think the Vikings used cryptography to conceal secret messages,” Nordby told ScienceNordic.com. “But I think the codes were used in play and for learning runes [letters in various Germanic alphabets], rather than to communicate.”

So if you’re thinking the “Kiss me” message means that the hulking, bearded, horned-helmet-wearing warriors were actually big softies when it came to wooing the lady Vikings, think again. As Nordby notes, “People challenged one another with codes. It was a kind of competition in the art of rune making … (testifying) to a playfulness with writing that we don’t see today.”

And sometimes the runes more closely resembled something you’d read on the wall of a bathroom stall than some ancient coded text.

“A typical bunch of male adolescents were fooling around and wrote tall tales about treasures and their own sexual prowess,” Norbdy says, describing another set of runes that’s since been decoded.

Still, the “Kiss me” note shows that even the Vikings could muster a little romance now and then. So gentlemen, remember that on Friday – if even a Viking can write the object of his affection a Valentine’s message, you have no excuse for forgetting.