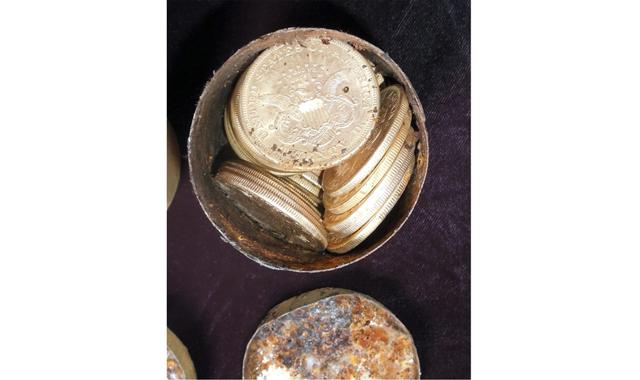 It may be hard to believe – especially as the dastardly “polar vortex” leaves most of Canada and the U.S. in a state of chill usually reserved for ice cube trays and fine vodka – but there are still some places where the ground isn’t completely frozen over. And in one of these wonderfully warm and cozy locales – known popularly as northern California – the soil sometimes erodes and reveals items long buried beneath.

In this particular case, it’s a plot of land its “middle aged” owners John and Mary call Saddle Ridge. The site of many a long stroll, it was on one of their walks last year that the couple discovered an old tin can sticking out of the ground. The curious couple, who’d never noticed the can before, dug it up and brought it back to the house.

“I said to Mary, ‘Wow, this thing is heavy. It must be full of lead paint.’ I couldn’t figure out what in the world would weigh that much,” John said in an interview with Kagins Inc., the rare coin firm that now represents the couple. “[Then] the lid cracked off and exposed a rib of a single gold coin. I knew what I was looking at immediately … It’s impossible to describe really, the strange reality of that moment.”

RELATED: A Feast for Gold Bugs

The couple had, in fact, stumbled onto a stash of buried treasure. They returned to the site and ended up recovering an additional five cans of coins – an overall haul of 19th century American gold coinage with an estimated worth of around $10 million. Kagins’ David McCarthy noted that because of the careful way they were stored and buried, it’s likely the coins were placed there over a period of time by someone wary of leaving so much money in the bank.

The find is the biggest in American history, which explains why John and Mary (which could be pseudonyms) are only on a first name basis with the press. They couple didn’t want to attract much attention – or eager treasure hunters to their property – and noted they only came forward with their find to “to keep the story of these coins intact for posterity.”

“Money can change other people’s perception of us more than our own perception of ourselves,” Mary said. “We don’t want that; we don’t plan to tell our extended family or friends until more time goes by.”

John and Mary plan to donate some of their newfound wealth to the poor and to underfunded arts organizations, though ultimately the self-employed couple intends keep working while enjoying the financial security the treasure affords them.

“The answer to our difficulties was right there under our feet for years,” Mary added. “Don’t be above bending over to check on a rusty can!!!!”