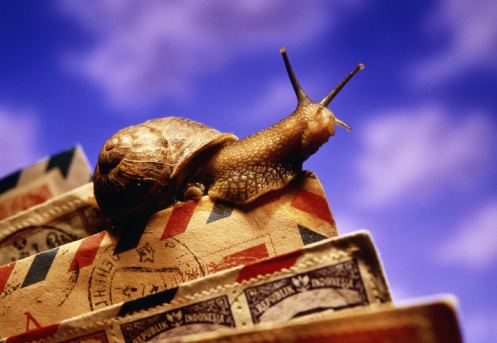 Someone at Canada Post has some explaining to do…

Calgary’s Anne Tingle received a letter from her little sister recently – not exactly headline news except for the fact that the letter was mailed 45 years ago.

“The first thing I noticed, besides that it was a little bit torn, was that it had a six cent stamp on it. And then I looked it over and it was a 1969 postmark,” Tingle told the CBC. “It was from my sister, from when she was nine. She had come to be the ‘mother’s helper’ after my second baby was born. And it’s a thank-you letter. It starts with a poem.”

No one knows how the letter made it to Tingle, or who delivered it (though she did leave a forwarding address for mail at her old home) but they do know that the reason it didn’t make it almost half a century ago is because her sister, Esther Stringam, accidently put the wrong house number in the address.

Enclosed with the letter was a note from Canada Post apologizing for the damage done to the letter which, to Tingle, considering the context, is more than enough to make up for the lateness of the letter.

“I think it’s the most wonderful, incredible mystery,” she said to CBC. “And why are we maligning Canada Post when they do this kind of heroic thing for four and a half decades for six cents?”