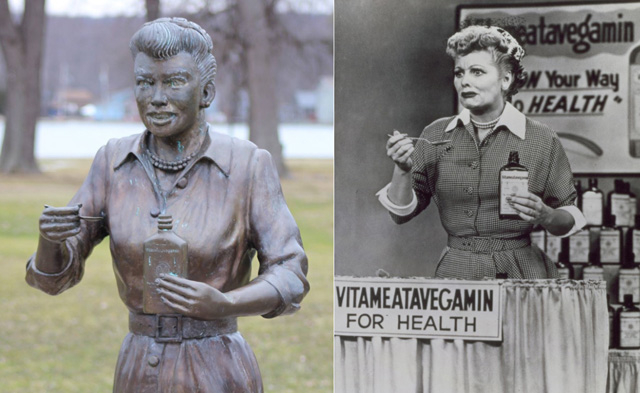 Somebody’s got some ‘splainin’ to do, and for once it isn’t Lucy Ricardo. In fact, the beloved sitcom character, famously portrayed by comedienne Lucille Ball in the ground-breaking 1950’s sitcom I Love Lucy, is the victim in a statue snafu that sounds like it’s right out of one of the show’s plotlines.

According to the Canadian Press, the Lucy mishap began in Celoron, a town in New York State where Lucille Ball grew up. A few years ago a local couple decided the town’s Lucille Ball Memorial Park was missing one thing: Lucille Ball. So they went out and found and commissioned a sculptor to craft a bronze statue of Ball, outfitted as Lucy and holding a medicine bottle and spoon as a tip of the hat to the famed “Vitameatavegamin episode” of I Love Lucy.

The resulting statue, when viewed from the ground up, is a spot on recreation … until you reach Lucy’s head. We’re not sure who the sculptor thinks Lucille Ball is. Judging by the head, maybe John Travolta in drag?

Not surprisingly, fans began protesting the statue from the time it was unveiled in 2009. The sculptor, Dave Poulin, who resides in a neighbouring town, originally refused to fix the statue unless he received an extra “$8,000- $10,000,” according to the Mayor of Celoron, Scott Schrecengost (it’s not known how much the original commission was). But when the story got out and began receiving increased attention in the media and online, including a Facebook page called “We Love Lucy! Get Rid of this Statue,” Poulin softened his stance and agreed to fix the Lucy statue.

NPR notes that Poulin even admitted, “that he doesn’t promote himself as ‘a ‘great’ artist.’” No kidding.

As it turns out, despite Poulin’s offer, Mayor Schrecengost plans on commissioning a different artist to fix the statue.