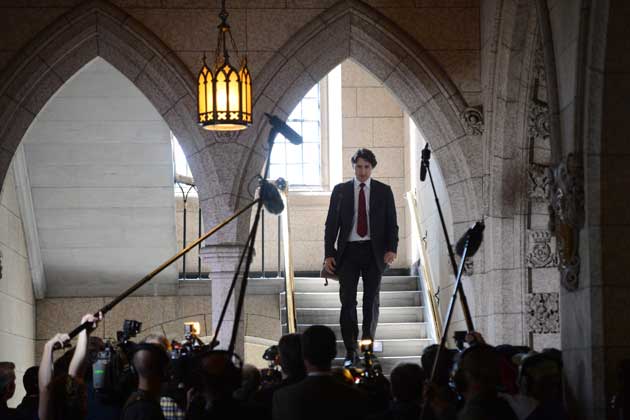 Shortly after Liberal Party of Canada members elected Justin Trudeau, 41, as party leader on April 14, 2013, the current (Conservative) governing party issued a statement. It criticized his ability to fulfill the office of prime minister, saying he lacked the “judgment and experience” needed in a time of “global economic uncertainty.” His famous surname would not be enough.

But like his late father, Trudeau has charisma, something the current PM runs a bit short on. American singer Debbie Gibson once observed that celebrities should never underestimate their power. Their ability to attract attention has an effect, “because then people get involved on a personal level,” she said.

They’ve jumped by the thousands onto his bandwagon. Trudeau won the leadership race with 80 per cent of the votes cast by the greatest number of members ever selecting a leader in Canada. The Trudeau team engaged young people through savvy use of social media like Twitter and Facebook. (It also raised more than $1.3 million in support for his campaign, well above fundraising efforts of Trudeau’s rivals.)

Many of his recent supporters may have no experience of the bitter divisions that weakened the Liberal Party. In his acceptance speech, Trudeau made it clear the “era of hyphenated Liberals,” more focused on infighting than serving Canadians, was at an end. He asked for unity of purpose from Canadians, to act constructively, with a positive and optimistic attitude to, among other things, “make reconciling the environment and economy a real priority.” But Liberal positive politics will soon face unrelenting, negative attack ads, he noted ­– the old-fashioned politics of negativity. Canadians expect better, he proposed – “leadership that will shape our best instincts into an even better country.”

Trudeau’s life experience may be much wider than the Conservative statement suggests. As youngsters, he and his brothers occasionally travelled with their prime minister father, experiencing foreign cultures and meeting world leaders. And with an intellectual such as Pierre Trudeau as an involved and energetic father, it’s not hard to understand the capacity for learning that has become apparent – and respected by rivals – during the leadership campaign. There’s no lack of self-determination, either. Trudeau chose a career in education, resisting calls to become a politician until he felt ready. (His emotional eulogy to his father signaled his ability to reach the public.)

He’s been underestimated before – just ask Senator Patrick Brazeau, whom he bested in a boxing match to raise money for cancer research. Trudeau wasn’t expected to win against the karate-trained Brazeau but had worked out diligently for six months. So the take-home message might be: Watch out, Mr. Harper, the new Liberal leader may be more of a heavyweight than you and your party think.