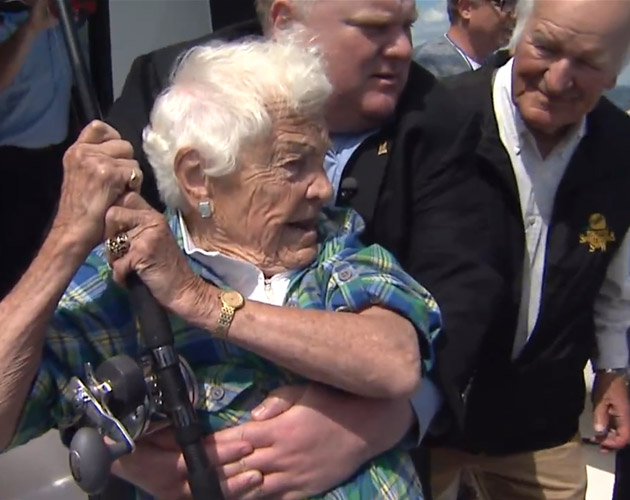 Someone check if Satan is wearing long johns because hell may have just frozen over. The Toronto Star, famously loathed by Toronto Mayor Rob Ford (and some would argue vice versa), published a positive piece about the controversial civic leader today.

It’s not very long, there are no accompanying images and the first sentence puts the focus on a fish, but it’s there. The article tells how Ford, while taking part in the Great Ontario Salmon Derby yesterday with Mississauga Mayor Hazel McCallion, clung to his mayoral counterpart when the fish she was reeling in nearly pulled her overboard.

The event received press across the city, and earlier today, Ford was all smiles and sunshine as he helped open the 135th Canadian National Exhibition (and he did it without tripping on the ceremonial ribbon or stepping on a puppy or any other blunder). Again: positive news.

Is it possible that Toronto’s much-maligned mayor is on a public relations rebound? Maybe we’re overreacting, but two straight days of good press is a big deal for a mayor who’s been accused of smoking crack, showing up inebriated to a Toronto street festival, reading while driving and groping a fellow politico at a party (and that’s just off the top of our heads).

And while saving Hurricane Hazel from taking a dip in the drink is a good start, here’s a few other tips to help Mayor Ford win favour with Toronto voters.

Former U.S. congressman Anthony Weiner made headlines in 2011 for electronically flaunting his man-bits to women who weren’t his wife. The scandal cost him his job. Earlier this year, he resurfaced, running for mayor of New York City. At the time, it seemed possible that voters might offer Weiner a chance at redemption until word got out that he was back to his sexting ways.

The moral: don’t pull a Weiner. Whether it’s a sexting scandal or any of the multiple reasons Ford’s found himself in hot water, if you’re on the road to redemption, don’t screw it up by falling back into the bad behavior that got you in trouble in the first place.

A major knock against the mayor is that when the annual Gay Pride Parade comes to town, Ford heads for the hills (or, more accurately, the cottage). Guess what – when you’re the mayor of the most culturally diverse city in the world, you’re expected to show up to such events. No one’s saying Ford needs to march the parade route in a rainbow thong (not going to help with the whole redemption thing), but next year, when World Pride comes to town, the mayor needs to be front and centre, welcoming revellers with open arms and showing the international community that Toronto is proud to celebrate Pride. This isn’t Russia.

There’s a rumour going around Toronto that Mayor Ford is fond of subways and cars. Odd – he never really voices his opinion on the matter.

Nevertheless, the simple fact is Toronto is overcrowded, and a shift in infrastructure is sorely needed. Are subways better than LRTs? Are cars more important than bikes? Who’s to say? The key is not to frame the discussion as “The War on Cars” but rather something more diplomatic, like the “Treatise on Transit.” Framing a civic discussion as a “war” creates an atmosphere of battle. Lower your voice, Mr. Mayor, let others talk, try to understand their side of the story – and we mean really try to understand it – and maybe you’ll slowly earn the reputation of “Man of the People” as opposed to your current designation of “Man of the People Who Drive Cars and Hate Reason.”

Get Off the Gravy Train

Seriously, it’s a joke. The gravy train’s got less money than the TTC and is about as reliable. Leave that worn-out slogan behind and move forward in an environmentally friendly and compact Compromise-mobile.

This, of course, is just a start. The redemption of Rob Ford isn’t easy, and it may not take, but the opportunity to save a beloved nonagenarian from falling off a boat doesn’t happen every day. Ford saved the day. The press is good. The question is: for how long?