Miley Cyrus at the VMAs: She’s in the Thicke of It Now 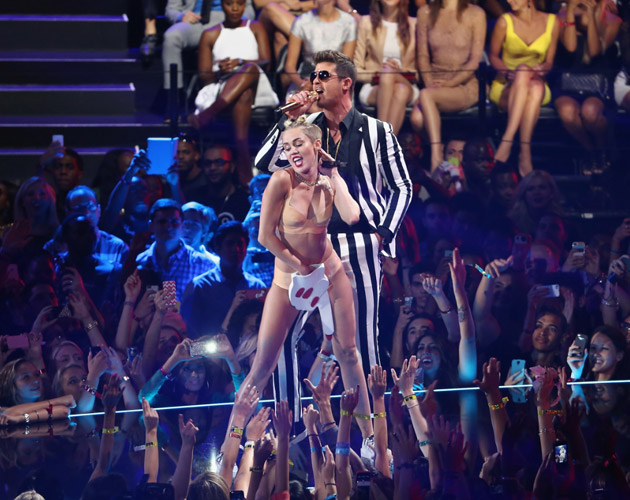 By now you’ve read all of the press surrounding Miley Cyrus’ performance at the MTV Video Music Awards. Once positioned as a wholesome, teen princess as the star of Disney’s Hannah Montana TV show, the former child actor and singer let the world know that at 20-years-old she is now a grown woman—and based on her vigorous dry humping (more on that later), she is a woman in heat.

As a multi-millionaire and former employee at a family-friendly media empire, this is apparently the best she can muster up as a newly-arrived adult. Is she playing out a modern day minstrel show as New York magazine’s Vulture wrote of her stereotyped appropriation of Hip Hop gesturing and dancing (she lives to twerk!)? Or is this simply a young woman’s evolution as an artist and exploration into her sexuality, no more provocative than Lady Gaga’s over-the-top overtures (it’s worth noting that she also presented an eyebrow-raising performance at last night’s show).

Whatever her motivation, it’s clear to see she has learned from the publicity hounds before her. These kinds of shenanigans aren’t new. We’ve been shaking our heads and clucking our tongues at wild pop stars for years. Do you remember Prince’s tight butt mooning you in his behind-baring chaps? And wasn’t that Janet Jackson’s nipple saluting you during the Super Bowl halftime show? And let’s not even get started on Madonna and the button-pushing field day she’s had with sex, religion, and race—she practically invented the modern day celebrity’s blueprint for sending the moral police into heated militia mode.

The reaction from the audience in attendance was shock and confusion as Cyrus stripped down to a nude coloured bra and panty, leaned over and gyrated against the crotch of R&B singer Robin Thicke. Thicke has the distinction of singing, ‘Blurred Lines,’ the appointed song of the summer, and at 36-years-old the new father and married crooner should have known better. A lot better.

Dressed in a stripped suit and rocking grown man swagger, he stood with his hips jutted out as a woman barely out of her teens serviced his manhood in front of the free world. What exactly did he hope to gain from this stunt? He’s already embroiled in a copyright infringement drama over claims that his hit song sampled Marvin Gaye’s ‘Got to Give it Up’ (he offered Gaye’s estate a paltry $600,000 for the gaffe and is now launching a preemptive lawsuit against them–yes, them). And even the track in question has been labelled a four-minute sexiest sing-along. In the music video the screen flashes with such “subtle” messaging as, “Robin Thicke has a big d*ck.” Well, he has a big publicity blunder on his hands now, too.

Of course, much of the conversation following the VMA stunt have focused on Cyrus. On Twitter, the hashtag, #StayStrongBillyRayCyrus is now trending, alluding to the fact that Cyrus’ father must be saddened, mortified and shamed by his daughter’s antics (no such hashtag was created for Pattie Mallette, mother of Justin Bieber, even after he SPIT ON HIS OWN FANS). Others aren’t so tame and are simply calling her every derogatory name you could ever affix to a woman. As for Thicke, he isn’t receiving nearly as much backlash, although he rightly deserves it. Once again we’re vilifying the young woman and giving the older man a pass?

Oh Miley, girl, you’re in the Thicke of it now…