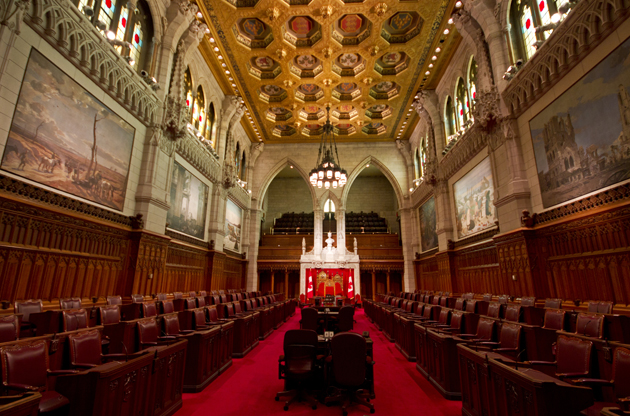 Compared with our neighbours to the south, whose politics are chock full of Weiners, Spitzers, spying, and dalliances with presidential interns, the Canadian political machine comes of as, well, rather dull. We perk up around election time, and every so often a municipal politician will be accused of smoking crack, but nothing captures Canadian attention more than politicos caught with their hands in the public purse.

In that sense, the Canadian Senate expense scandal is as riveting as any drama to come out of Hollywood North. Too bad it’s all real – the politicians, the money spent, the deceptions, the bickering.

Our last word on the topic focused on the situation leading up to the resumption of Parliament following prorogation – Prime Minister Stephen Harper’s favourite “get out of jail free” card. Money had been spent, accusations about who was at fault flew, and we all wondered what would happen when Parliament resumed in the fall. Here’s a quick rundown of the events since then:

The beginning of September sees Prime Minister Harper appoint Quebec senator Claude Carignan the leader of the government in the Senate. Meanwhile, Pamela Wallin continues to deny any wrongdoing, likening the Senate to a lynch mob. Nevertheless, she repays more than $110,000 in money and interest.

October kicks off with the RCMP allegation that Mike Duffy granted a former CTV colleague lucrative Senate contracts. It’s technically termed “breach of trust and fraud,” but plain old “corruption” sounds good too. As well, three more Harper Senate appointees find themselves under fire for expense claims. Among them, Carolyn Stewart Olsen – a member of the team investigating the scandal. Can you say “irony”? Another is Carignan himself. The Prime Minister has a knack for picking them, doesn’t he?

Unfazed, Carignan swiftly moves to suspend Duffy, Wallin, and Patrick Brazeau from the Senate without pay. The “Senate Three” promptly lawyer up.

Duffy drops the biggest bombshells – think “shock and awe” – when he provides correspondence that seems to show that the Prime Minister’s Office (PMO) gave the thumbs up to his expense claims, knew about the whole affair, and later tried to force all the blame onto him when news of the expenses got out. I believe the exact term he uses to describe the PMO’s dealings is “monstrous fraud.” Needless to say, the Prime Minister is not impressed. Most recently, Duffy announces that his legal tab for the affair was picked up by the Conservative Party. Prime Minister Harper says that’s the Conservative Party’s business, not his. Gee, if only the party had a leader to take responsibility…

Wallin, meanwhile, threatens the Senate with a lawsuit if they suspend her, while Brazeau shocks everyone when he explains how, the very morning of his Senate appearance, Carignan offered him a deal – essentially play nice and say sorry, and we’ll go easy on you. Carignan says they spoke, but he was just extending an olive branch out of friendship.

The Prime Minister, for his part, proved he has pretty good aim, tossing former aide Nigel Wright squarely under the bus when it comes to the whole Duffy debacle. Yes, his former adviser and one time member of his inner circle is evidently a dastardly fellow – a cheque-writing hooligan who single-handedly caused all of this Duffy fuss by lending him $90,000 to repay the public purse. Everyone else in the PMO, apparently, is as innocent as a new-born babe. Of course, originally the Prime Minister said that Wright stepped down, while expressing regret over it. Now he acts like he was Donald Trump on The Apprentice, landing a big, fat “You’re fired!” on his former right-hand man. But, you know, who are we to split hairs?

As it stands now, the Prime Minister’s support in the Senate is fraying. Many Conservative Senators disagree with suspending the “Senate Three,” while the Opposition wants to know how, after all of this, the PMO didn’t know what was going on within his own office and party. This Nigel Wright excuse is only going to go so far.

If this was Hollywood, Wright would ride triumphantly into the Senate atop a moose and face off with the Prime Minister in an epic battle scene, perhaps striking the decisive blow with a gilded Canadian flagpole, setting everything straight before riding off into the sunset with a beautiful woman in tow.

But this isn’t Hollywood. This is Canadian politics – which means there’s lots more bickering and finger-pointing and possibly another prorogation or two to endure before we get any clear-cut resolution.

Kind of scary, huh? At least we can be thankful that these aren’t the people tasked with running our country….