50th Anniversary of the JFK Assassination: a Multi-Gen Perspective 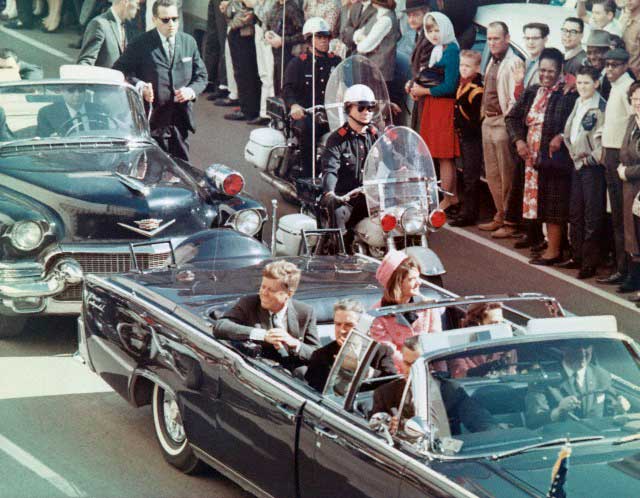 President and Mrs. John F. Kennedy smile at the crowds lining their motorcade route in Dallas, Texas, on Nov. 22, 1963. Minutes later the President was assassinated as his car passed through Dealey Plaza.

Earlier this week, I sat at a meeting with colleagues at Zoomer to discuss coverage of today’s 50th anniversary of the assassination of JFK. I was the oldest person in the room. The youngest was a year old at the time of the 25th anniversary.

Like everyone else of my generation, that day remains as vivid and visceral in detail and passion as it was 50 years ago.

I saw the announcement of the shooting at lunch hour on a TV in the student centre of the University of Buffalo. I’d transferred there from the University of Manitoba a couple of months earlier. A week later, I was to be married, at the age of 18, to a violinist in the Buffalo Philharmonic Orchestra and to live in the U.S.

That weekend, waiting for my husband-to-be at his parents’ home, I watched the live broadcast of Jack Ruby killing Lee Harvey Oswald. Because of where I was at the time, both geographically and emotionally, the experience of that day has been indelible for me.

But what, I wondered, could it mean to anyone who wasn’t even alive on Nov. 22, 1963, or who was too young to be aware of what had happened?

For those of us who were there, it was something like a Rorschach test. Our thoughts, our feelings, our grieving depended on who we were at the time and what was going on in our lives.

For me, I’m almost embarrassed to admit, my overwhelming response was devastation at Jackie’s loss of her husband. I was about to acquire a husband of my own and couldn’t imagine (at the time) living without him and so I identified painfully with Jackie’s loss.

The 50 years that have passed are my life, really, from naive teenager to divorced grandmother with a second love.

The anniversary recalls it all.

That day of Nov. 22, 1963, was also a bridge for the culture, a bridge into the ’60s. The big hits on the Billboard chart in 1962 were by Connie Francis, The Four Seasons and Bobby Vinton.

Less than two months later, on Jan. 10, 1964, the first Beatles album was released in the U.S.: Introducing The Beatles. On Jan. 13, The Times They Are A-Changin’ by Bob Dylan was released.

On that day exactly 50 years ago, everything changed for all of us, something we intuited as we watched the live broadcasts, even if we didn’t yet know what the change would bring.

But, I’ve been wondering, what possible significance would this anniversary have, could it have, for Canadians who are in their 20s, 30s or 40s?

NEXT: The 50th Anniversary of the Assassination from a Millennial’s Perspective

I was not yet a thought or even a hope the day JFK was assassinated. My parents were only five years old, years and years away from becoming high school sweethearts.

And now, at 26 years of age, I sit in a story meeting discussing the tragic event, and it dawns on me how far removed I am – emotionally – to that pivotal day 50 years ago.

Of course, knowing that a woman lost her husband and that America lost their beloved president moves me.

But that day is a vivid snapshot in history, a series of images of the time when a picture-perfect America lost its innocence.

Although we now know that Kennedy had his indiscretions, in the eyes of Americans who elected him and adored him, he seemed flawless. Now, when nothing is private and everyone’s dirty laundry is on display, that idyllic image of a public figure seems unattainable.

What the 50th anniversary of Nov. 22, 1963, means to me is the image of a perfectly coiffed President Kennedy shining in the sunlight, flashing his charming smile.

It’s the image of an effortlessly stylish Jackie, her pink Chanel suit topped by a perky pillbox hat. That image, that esthetic, still signifies class and refinement for my generation.

It’s the image of a polished vintage convertible bearing the charismatic couple on a bright day into a dark future that they could have never anticipated.

It’s that heartbreaking black-and-white image of a stoic Jackie flanked by her two young children, still looking incredibly elegant despite her world crashing down around her.

And it’s the images of Americans reading their newspapers with the front page blaring in bold letters, “JFK Shot Dead.”

The meaning of that day for me is how a transforming moment of everything right suddenly going terribly wrong brought a sense of unity not just to Americans but also to the rest of the world as they huddled around their TVs to watch an emotional Walter Cronkite announce the devastating news.

My generation and my parents’ generation may not have seen that broadcast live, but we know it so well. And I can’t help but wonder how an event like this would have been covered today. It was the first time the masses were glued to their screens to watch a story unravel before their eyes. A record-setting 41.5 million television sets were in use during the funeral. News coverage would never be the same.

As I reflect on how painstaking it must have been to read the headlines and watch anchors – for the first time – become vulnerable on air, I imagine how unbearable it would be today. Back then, the Zapruder video of the assassination was not seen for a decade after it was recorded. I think about the spectators with iPhones on every street corner recording and immediately sharing these graphic images on social media – billions of people broadcasting their stories and images along with credible news sources. A part of me wishes I could time travel to an era that seems so much simpler.

Although I was only one year old on the 25th anniversary of the assassination, I can look back at Nov. 22, 1963, and know that the world changed forever.