“Gravity” and “Downton”: What they have in common 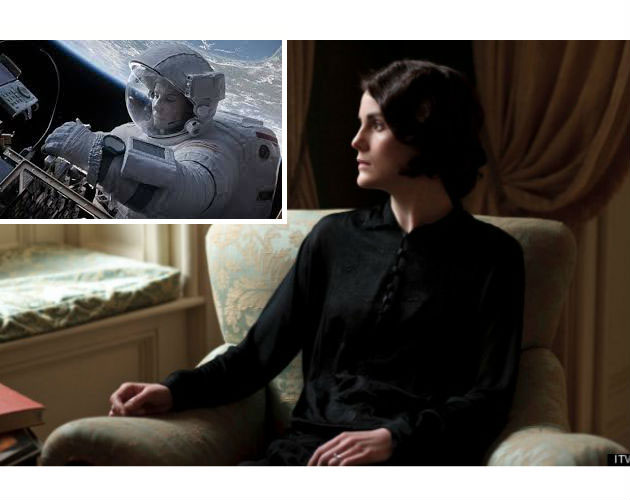 Sunday’s episode of Downton Abbey, the first of the new season, and the movie Gravity don’t seem to have much in common.

The PBS series takes place in a stately pile in the English countryside. The movie is set in outer space.

Downton is an ensemble piece with multiple generations and story lines.

Gravity is a two-hander with an emphasis on a solo performance and a single, intense narrative of survival.

The Masterpiece Theatre hit is a genteel family saga and period costume drama about inheritance, good manners and servants both wise and weaselly.

The highly praised movie is a sci-fi thriller fueled by special effects.

But the movie and the TV show are, at their essence, the very same story.

Both are about a woman finding her way back.

(And here comes the spoiler alert.)

Lady Mary, the eldest daughter of Lord Grantham and Dr. Ryan Stone, the medical engineer, have both been obliterated by grief.

The sudden, accidental deaths have catapulted each woman into a depressed, insular frozen state where loss, the randomness of fate and the fact of mortality have numbed her to the value of life.

Neither woman cares much whether she lives or dies. They carry on dutifully and distantly only because they must.

How each finds her way back to being fully alive and engaged with the world forms the plot of each story. Each has one or more mentors who pull and guide and cajole her back to a purposeful, cherished life.

Everything about Ryan Stone’s journey is literal, including the journey. Her mentor is the George Clooney astronaut whose lesson in letting go is also literal, as he untethers himself and floats into oblivion. Her rebirth is literal, too. She falls to earth and slithers, crawls and walks out of the water.

Lady Mary’s journey is more subtle. Encouraged by an indomitable grandmother, a widowed brother-in-law and a caring butler, she begins to take an interest in her infant son and in the estate, half of which she learns she has inherited. The inheritance sets her up for conflict with her father, who owns the other half. It’s a situation she undertakes with determination and grit. There’s no doubt that Lady Mary is back.

What these women do with the rest of their lives is left to our imaginations in the case of Ryan Stone. And to weeks and weeks of delicious Sunday evening entertainment in the case of Lady Mary.