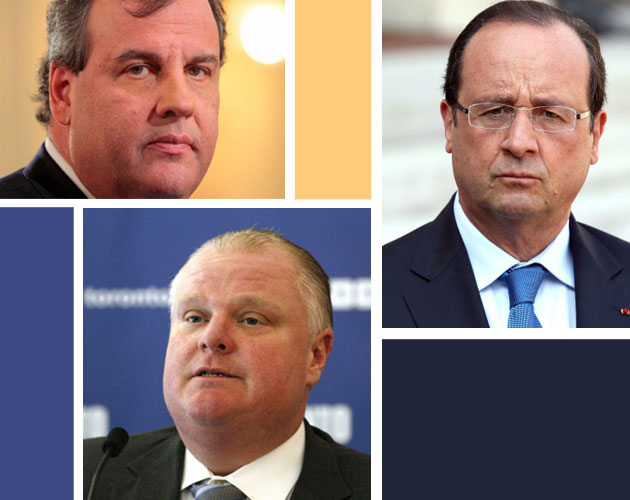 All three, in three different countries, are politicians who have been behaving badly.

So it may seem like a trick question. But the answer should be obvious.

Only Christie has been behaving badly in carrying out the duties of his office and betraying the trust of the people who elected him to behave ethically and to oversee legal and ethical behavior by his staff.

Hollande, it’s been reported, has been cheating on his partner Valerie Trierweiller with a younger actress although Trierweiller, to whom he is not married, lives in the Palais Royale as First Lady and has a staff paid by the state.

As for Ford, well, he’s been seen doing and saying stupid things again in what appears to be another drunken stupor.

But here’s why Ford and Hollande are different from Christie: the Toronto mayor and the French president have been cavorting extracurricularly — that is, on their own time and in their personal lives.

They haven’t been abusing the power of their positions to punish opponents with severe consequences for their constituents.

In fact, if it weren’t for the 24/7 surveillance society we’ve become, the off-duty activities of elected leaders like Hollande and Ford would never become public.

Plenty of married people have affairs. Even — gasp! — unmarried people with partners, like Hollande. And plenty of people in high-stress jobs drink too much after work. Some even do it at work, discretely taking a nip from the bottle in the bottom drawer. Every newsroom I ever worked in had a full complement of alcoholics, both active and reformed. Nobody videotaped them on the job or off.

Now nearly everybody with a smartphone is eager to catch somebody else behaving badly, any time of the day or night. And if the catch is a public figure, the score is higher.

Forget video games. We’re into an era of video gotcha.

What’s your view? Let us know in the comments!