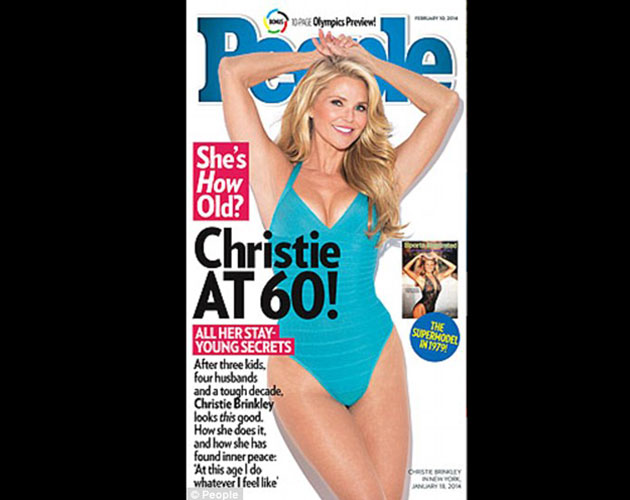 Please, please tell me I don’t have to try to look like Christie Brinkley.

She’s the cover girl on People Magazine this week: “Christie AT 60! She’s How Old? All Her Stay-Young Secrets…”

There’s another small inset picture of her on the cover. It shows her posing for the cover of Sports Illustrated.

She looks exactly the same.

Of course I can’t look like Christie Brinkley even if I tried. No matter how much I tried.

But the message now is different. It’s not about beauty or hair styles or model figures.

It used to be you’d flip through a fashion and beauty magazine and find information about what was used to enhance the model’s coverworthiness: the lipstick, eyeshadow, blush.

In this week’s People, on page 67, we’re told “How She Does It”…The Uptown Girl Shares Her Secrets For Looking Hot, Healthy and Absolutely Ageless.”

Among her secrets: yoga, exfoliation, switching her hair part to the other side. drinking cold coconut water “if I’m craving something sweet.”

Not among her secrets, or at least the ones she’s willing to share: photofacials, laser, liposuction, Botox, hormone replacement, surgery, fillers, lighting, photoshopping, hairstyling,

Turn the page. There’s a picture of her with her daughters and not one person in the photo looks over 35. On the same page, she shares advice for “absolutely ageless” beauty:

“The word ‘involved’ has a lot to do with feeling young…one of the best (beauty secrets) is to care about the world around you.”

Oh, puhleeze. Let’s be honest. We’re talking about winning the genetic lottery for a start. And that’s a very big start.

From there, it’s a matter of having the resources, the will and the desire to do whatever is possible to not look old. That can range from common practices (that are rarely criticized) like colouring greying hair or whitening teeth to whatever cutting edge remedies (that are very much criticized) the facialist, dermatologist and cosmetic surgeon can offer.

Because older women are getting a lot of awfully conflicting messages:

– Embrace your age and don’t try too hard to look younger than you are. BUT at the same time, stay “absolutely ageless.”

– Look like Christie Brinkley, or least look as good at 60 as she does. BUT shame on you if you do anything beyond doing yoga and drinking coconut water and caring about the world to achieve that look.

Older women are not sexy or desirable unless they look like they’re no more than 35. BUT they have to be genetically capable of that or else they’re vain and cheating.

Rage against age because the culture requires that you remain ageless. BUT be so subtle about it that nobody notices what it takes to be a “timeless beauty” — like Christie Brinkley.

By the way, I saw her ex-husband on TV this week interviewed by Charlie Rose.

Billy Joel is 64. And looks every bit of it — even if he does care about the world around him.