Sacre Bleu! Some People Are Single! 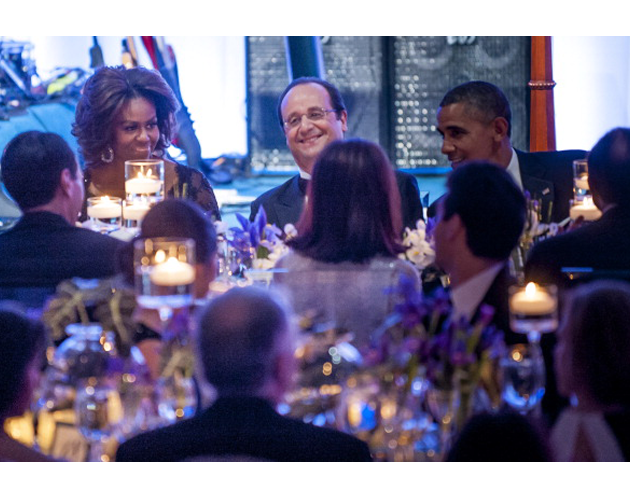 As if Valentine’s Day isn’t disturbing enough for singles this week, the most powerful country in the world escalated the trauma of singlehood by turning the newly separated status of French President François Hollande into a diplomatic crisis that attracted world attention.

The seating protocol for a White House state dinner – the most formal of events reserved for only a few worthy visiting heads of state – seems to require that said head of state be accompanied by a body of an opposite gender.

Think Noah’s ark, and you’ll get the idea.

The important concern – more important than the Middle East (we know that because Kerry was dining, not negotiating) – was where to put Hollande and who would be put beside him.

No doubt the French and many of his ex-girlfriends who make up a large percentage of the French population could offer opinions about where Hollande should be put … but I digress.

Diplomatic etiquette dictates that the honoured guest and his or her spouse be seated beside the President and the First Lady at different tables.

An urgent call was extended to find a female who could flank President Obama’s left side, in place of the French woman who was supposed to do the job (the Second Lady) but who was dumped by the head of state who was cheating on her with an actress (the Third Lady) despite having dumped his long-term French partner and mother of his four children (the First Lady) in favour of the woman (the Second Lady) who was supposed to sit next to the president at dinner.

Thelma Golden, a married woman of impeccable credentials, rallied to the cause on the president’s left.

But, still, imagine what would happen if Monsieur Head of State were then placed to the right of Madame Obama.

The lack of symmetry in the seating plan would no doubt cause the populace to take up arms (they do that anyway) and cause so much chaos that we Canadians could just move in and take over all their foreclosed condos.

But wait! A creative solution was found!

Indeed, Hollande was placed between the President and the First Lady, who was given Stephen Colbert on her right.

As for being single this week, with Valentine’s Day casting its heart-shaped shadow everywhere you look, remember this: having a partner isn’t always for the best and often makes life complicated.

But it does make it easier for the White House when you’re honoured at a state dinner.