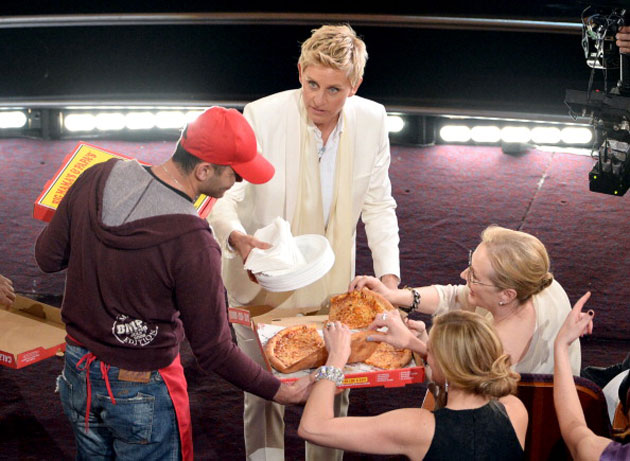 It’s so easy, when you want to get a cheap laugh, to pick on old people and to mock older women trying to look younger.

That’s exactly what Ellen DeGeneres did last night when she hosted the Academy Awards.

Many people like the way she handled the hosting job. Many people didn’t.

But few commenters seemed too terribly bothered by her ageist “joke.”

Right off the top, she made fun of June Squibb, a nominee for Best Supporting Actress for the movie Nebraska.

After DeGeneres noted that Squibb, 84, was the oldest person ever to be nominated for an acting Oscar, and praised her performance, she yelled in Squibb’s direction, “I’m telling everyone that you were wonderful in Nebraska.”

I doubt that Squibb has impaired hearing. Sure, some people may have hearing loss as they age into their 80s. Boomers may be getting deaf at an even earlier age because the music on their Walkmans and car stereos was so, well, booming.

But is hearing loss that accompanies aging anything to joke about at the Academy Awards?

And is a good age something to mock — especially when it’s marked by a remarkable achievement like being nominated for an Oscar?

One pundit who took exception (and only a few did) was Christian Toto writing on breitbart.com.

“One of the first jokes out DeGeneres’ mouth was an old age joke aimed at 84-year-old Best Supporting Actress nominee June Squibb.”

He also wrote, “Her Oscar monologue found her mocking both an elderly nominee and a show business legend in the first few minutes.”

Because even more unkind — actually downright nasty — was what DeGeneres said about Liza Minnelli.

The 64-year-old looked so terrible, DeGeneres implied, that she looked like a male impersonator of herself.

“”I have to say one of the most amazing Liza Minnelli impersonators I’ve ever seen in my entire life,” she said, pointing out Minnelli sitting in the audience. “Good job, sir.”

Minnelli will turn 68 this month. She’s had a long history of illness, injuries, alcoholism and heavy medication use including appearance altering steroids. She accepted an invitation to the Academy Awards to celebrate a tribute to her mother, Judy Garland.

Yes, DeGeneres did have a few good jokes. But her attempt to turn the Oscars into a sophomoric free-for-all just didn’t cut it — at least not for those of us who look forward to an aura of glamour and celebration. Selfies and a pizza delivery? That’s for people watching at home. What we want to see is something different.

Maybe the very best thing DeGeneres did was something she didn’t do. She refrained from making any remarks about the appearance of Kim Novak. So should we all.

Novak, 81, is a Hollywood legend who deserves our respect. In her 70s, she was seriously injured in a horse-riding accident and suffered broken ribs, a punctured lung and nerve damage. For almost 40 years, Novak has been happily married to Robert Malloy, 73, a veterinarian. They live on a ranch in Oregon where they raise llamas and horses.

I’m with actress, Rose McGowan, 40, who was enraged at the lack of a standing ovation when Novak came on stage.

“Kim Novak! No standing ovation?! Self-obsessed and disrespectful, that sums up the Oscar audience … You are all lucky that she graced you with her presence…”

As for all the self-congratulatory Tweeters who thought they were being oh so clever and showing off their comprehension of the word “irony” regarding Novak presenting the Oscar to Frozen, grow up.

And when you grow old, hope that people will be kind.

This discussion is becoming a hot topic across the web with several media outlets looking at the issue of aging in the public eye: