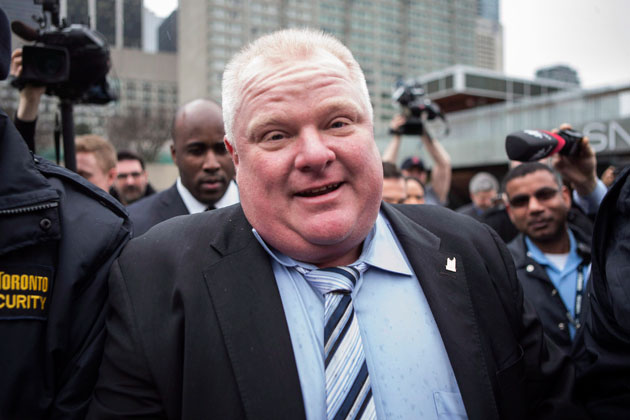 I’m starting to get worried that we may not have Rob Ford around next winter for non-stop hilarity.

Also, as Bill Clinton tactfully but truthfully pointed out this week on the Jimmy Kimmel show, we have to appreciate that Ford has graciously bestowed upon us unprecedented notoriety.

“He has absolutely destroyed every stereotype people have about Canadians,” said Clinton.

He’s easily the most colourful character to come out of the Great White Frozen North since William Lyon Mackenzie King discussed world affairs with his dead dogs, all of whom were named Pat, except for Bob.

But even King’s barking madness can’t compare with Ford’s most recent comedy routine, about how his finger slipped accidentally over to the wrong button so that, strictly by mistake, he voted against city council motions on naming a Toronto street in honour of Nelson Mandela and congratulating Canada’s Olympic and Paralympic athletes.

Ford did a wonderful job through this interminable winter and elusive early spring . We had an abundance of mirth to keep us warm. He made us chuckle endlessly, no easy feat when you’re dealing with a dour populace addicted to a hockey team struggling against all odds to make the playoffs.

He made us perversely proud to be seen around the world as the kind of people who could elect a drug-addled mayor lurching around town in drunken stupors.

No longer were we dismissed as cautious Canadians trudging to a bank on every corner with our tax-depleted pittance, queuing up obediently in snowbanks and slush for the streetcar that never comes, ignoring each other out of icy politeness or pathological inhibition in elevators everywhere.

He was a gift to long married spouses at restaurant tables who had nothing else to talk about and to couples meeting for the first time over coffee after flirting online who were advised not to talk about their awful ex-spouses or anything controversial.

All of a sudden strangers at take-out counters and coffee shops, on commuter trains and in taxis who might never have spoken to each other had ready-made small talk to share.

It was like being in the aftermath of a disaster when people are brought together by a common cause.

Except instead of being a tragedy, this disaster was a comedy.

How on earth are we ever going to put up with ordinary, predictable, sober, smart mayors who never surprise us, never disgust us, never make us laugh or shake our heads in wonder?

He may be, in the words of Elena Basso, the woman whose house is where the crack video was filmed, “a big f—ing idiot” but he is our “big f—ing idiot” and in that capacity he has served us well.