Boston Strong, Over and Over Again 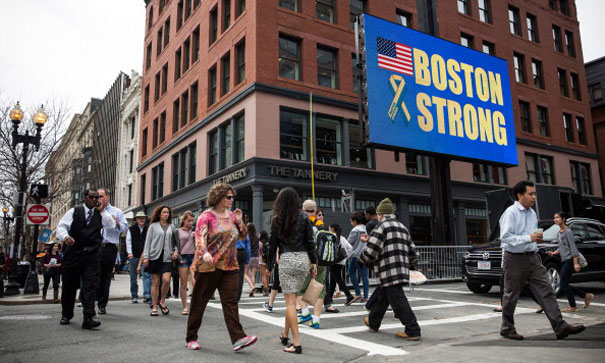 BOSTON, MA - APRIL 14: People walk past an electronic billboard reading 'Boston Strong' near the finish line of the Boston Marathon, on April 14, 2014 in Boston, Massachusetts. Last year, two pressure cooker bombs killed three and injured an estimated 264 others during the Boston marathon, on April 15, 2013. (Photo by Andrew Burton/Getty Images)

Flying into Boston days after the Marathon last year was like flying into a fortress.

Even more noticeable was the mental fortress.  Boston Strong.

Those words were everywhere — on banners, t-shirts, stickers, bumpers, flags.

They sprouted last April like crocuses in the earth and buds on the trees.

The response came as no surprise.

In 1774, in retaliation for rebelling against the tea tax, Britain enacted laws that deprived Massachusetts of self-government and historic rights.

Bostonians called them “The Intolerable Acts.”

They responded with outrage and resistance — just as they did last year after the marathon bombing.

Defiance against injustice and aggression is their heritage. Historically liberal, open-minded and progressive, Bostonians stand their ground. What is intolerable will indeed not be tolerated.

The 2014 Marathon next Monday, as always on the Massachusetts holiday of Patriot’s Day, promises to be memorable and soul stirring.

Boston Strong, not just a slogan but a mindset, will be in full bloom.

All those who participated last year but could not finish have been invited to run again this year, even though the Boston Marathon is notoriously the most difficult Marathon to qualify for.

Security will be extreme and the horrific memories of last year will likely flood the city.

But I’m certain the mood will be more celebratory than sombre.

They’ll be commemorating their strength and resilience, the renewal of resolve.

And how fitting that this year’s marathon takes place on Easter Monday, itself a festive day of renewal.

Boston Strong is a model of how people come together in the aftermath of tragedy and move beyond it, encompassing both compassion and generosity for the victims and festive celebration of survival.

It’s a mindset that would serve us well every day even in the absence of tragedy.