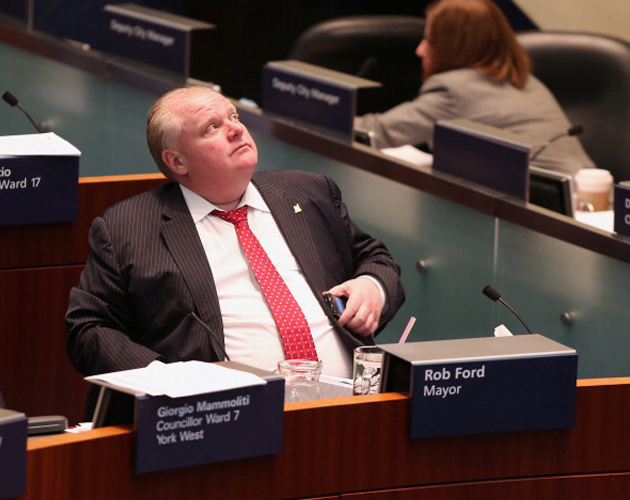 Listen, I feel bad for Rob Ford. I feel bad that he’s been drowning in his substance abuse, losing touch with reality and has become a caricature of himself on the world stage. But let’s be honest. The Rob Ford rumours go beyond substance abuse and crack videos. Ford can go to rehab and clean himself up but when it comes down to who he is as an individual, 12 steps can’t change that. It is simply a question of character.

Let’s pretend for a moment that Rob Ford had never smoked crack cocaine, appeared drunk in public and didn’t have allegations of heavy drug use polluting our perspective on him. He still made very questionable comments about minorities, the LGBT community and women, that should be enough to make us question him as the mayor of Canada’s biggest and most diverse city. If Donald Sterling’s recent allegations (and ban from the NBA) has proven anything, it is that there is no room for closed-minded values in 2014.

Sure, the man is entitled to his downfalls. As he’s known to say, “Nobody’s perfect.” But I feel that in order to have the privilege to run Toronto, you must accept and respect all of the people in it.

Let’s look at the shortlist of offensive things Rob Ford has said and done over the years:

– In 2006 at a Leafs game, Ford drunkenly says to a man during an altercation: “Do you want your little wife to go over to Iran and get raped and shot?”
– Remember when he said “Orientals work like dogs”?
– Or shared this misinformed notion: “If you are not doing needles and you are not gay, you wouldn’t get AIDS probably, that’s the bottom line”?
– Ford was accused of  “groping” female mayoral candidate Sarah Thomson.
– He referred to the Don Boscoe community where he coached football as “crime ridden” and the youth as “gang bangers.”
– Remember that time he attempted to speak Jamaican patois to his “buddies”?
– And what about his most recent lewd comments regarding Karen Stinz

And all of this aside, Ford is still an addict who has slipped up more than a few times. Most recently in his sister’s basement. If his powers hadn’t been stripped and there was an emergency in the city, how could he handle the situation? With crack pipe in tow? These past few months Ford has said he’s working on himself and it’s clear he’s been lying to all of us and himself.

The help Ford needs might be in rehab, but in my eyes it won’t qualify him with the ethics and character to run the city of Toronto.