Your flight is delayed, er cancelled. How about tomorrow? How about never? 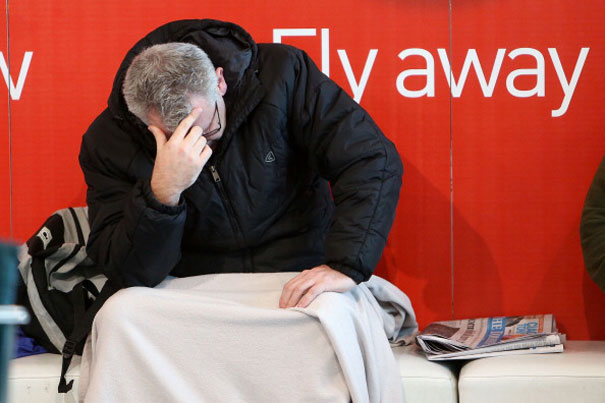 I do understand the necessity of your canceling my flight. Really, I do. Unforeseen events can arise. Even foreseen events can arise — like a mandatory rest period for the crew. Which is what you told me was the reason for the first delay of two hours. Subsequently, the further delay was explained as “weather” — although almost all the other flights on the arrivals and departures boards were coming and going very nicely.

Or maybe that was spelled, “whether” — as in “whether we feel like flying the plane or not.”

When my flight was cancelled altogether, some three hours later, I was informed the problem was “equipment maintenance.”

“We do apologize and we will keep you updated and informed” was the announcement I heard.

I understand, dear airline, that crews and weather and equipment may be temperamental. Also, that airlines use these excuses, er, reasons, for not being able to get it together as scheduled. Or for wanting to consolidate flights and save money.

In short, I accept your apology for leaving me stranded for five hours for no credible reason in Philadelphia while I was en route from Boston to Toronto (don’t ask….).

In return, I would appreciate your understanding concerning the next flight I’ve booked. If weather is a problem when I wake up that morning, as in, I’m under the weather, I just might want to delay my flight until a little later in the day. If I need unscheduled maintenance, say, an emergency manicure because of a hangnail, I’ll have to cancel and fly the next day. Also, there’s a possibility that before my booked return flight, after spending a week taking care of two grandchildren on spring break plus a toddler, I may need a mandatory rest period and so will postpone my scheduled flight for a day or two, until I feel really well rested. I’ll keep you updated and informed.

I know you’ll understand since you have the same issues. Sometimes things don’t go exactly as planned. Some things are out of our control. After all, we’re all human — well, some of us are airplanes, but you get the idea. We all have breakdowns from time to time (also break-ups, which can be just as incapacitating) Also, traffic and weather delays don’t only happen in the air or on runways.

So how about this: in return for accepting your apology and dubious explanations and for people never getting any compensation when they miss important meetings or job interviews or family events because you delay or cancel and rebook flights at your convenience, you accept our apologies when we delay or cancel or rebook flights.

Because right now, if I want to change a flight I’ve booked at the lowest fare to a later time, oh, say, five hours later, or two hours earlier, or even leave one day later, it’ll cost me a change fee of $100 to $200 plus the difference in fare — and a fare purchased for a same day flight to Boston or within seven days is easily upwards of $800.

Here’s what I’m prepared to offer you, dear airline. Every time you delay or cancel my flight and reschedule or rebook, you extend to me a voucher for the same privilege. And accept my apology.
We thank you for your patience and understanding.