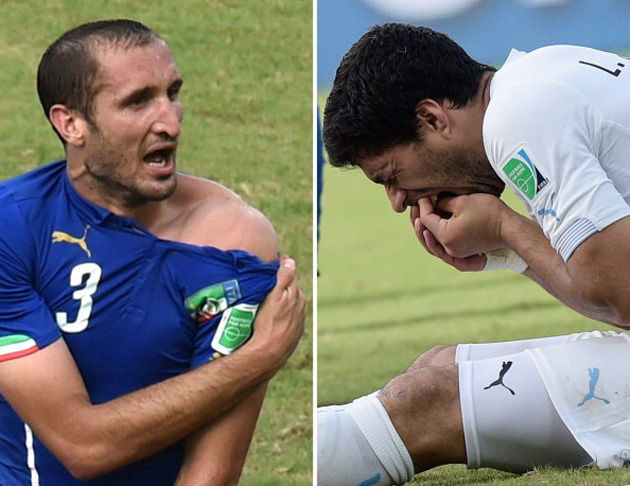 I got it wrong.

“You probably won’t see anything as explosive as that head butt at World Cup 2014,” I naively wrote a couple of weeks ago, referring to Zinedine Zidane’s attack during the World Cup final in 2006.

I totally underestimated the effect of rage and frustration on Uruguay striker Luis Suarez who sunk his incisors and maybe even a couple of cuspids into the meaty shoulder of Italy’s Giorgio Chielli.

I got it wrong but 167 soccer fans got it right.

That’s how many bet 175-to-1 that Suarez would bite someone during the World Cup.

One Norwegian fan reportedly won more than $2,000 for betting on bad behavior.

In some ways, it wasn’t unexpected.

Suarez has snacked on opponents twice before. He’s what’s known in kindergartens and kennels everywhere as “a biter.”

It’s so primitive, so vampiric, that it’s both repugnant and funny.

“You don’t usually see normal adults doing that. He acted like a child just starting school. There is an expectation of more maturity and social grace from adults.”

Even worse — and funnier — is how Suarez tried to cover it up by taking a dive and complaining that Chielle’s shoulder hit his mouth and hurt his chompers.

“Poor impulse control” is why Suarez munches on human flesh when he’s hungry for a goal, says the psychiatrist.

He finds it interesting that biting incidents in sports happen in boxing and soccer — two sports with restrictions on use of hands.

First, you take away the athlete’s ability to compete. That requires a meaningful suspension. Then, you fine him a sum large enough that it hurts even a player with a world class salary.

“But the bottom line is it’s got to be about what he wants: ‘You want to play soccer and make all this money, you can’t act this way.’ ”

Abrams, who counsels athletes and prisoners in anger management, says Suarez’ first visit to his office might go something like this: “So, why are you here?”

“Because they told me I have to be here.”

“Then you have a choice to make.”

Says Abrams, “You start with empowerment.

“You tell them, ‘You can be as great as you can be or you can give it up because you can’t control your impulses. You need to learn how to harness your emotions so you don’t break down and make decisions that hurt you. “Do you want to learn how to not do that?”

Abrams says he knows he’s been successful with an anger management client when “I can throw everything at him, insult him, demean him, provoke him, get under his skin — and he doesn’t react.”

Uruguay’s next game is Saturday at 4 p.m. And here’s a safe bet: Suarez won’t be playing.