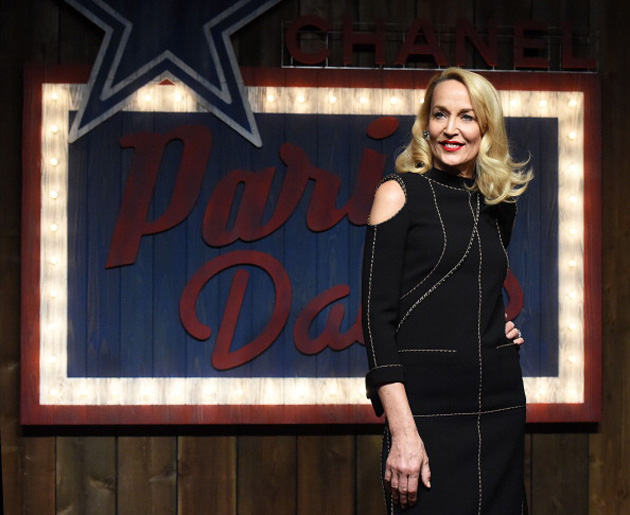 Jerry Hall, the ex-Texan ex-wife of Mick Jagger, has me in a quandary.

I can’t decide whether to applaud her or to boo her.

She’s telling the world, in a magazine cover story, that despite smoking, drinking, and tanning, “I look pretty good…”

She proclaims, in Good Housekeeping UK, “I am 58. That is pretty old, for God’s sake. I look pretty good for my age, and I am enjoying that.

“But I smoke, I drink, I like wine, I love sun tanning, I drink coffee. I am doing all sorts of things I shouldn’t do.”

You’ve got to admire the chutzpah, the self-esteem, the kick-ass confidence.

It’s nothing less than you’d expect from one of just two women who managed to be wedded to Sir Mick out of the multitude who bedded him.

On the other hand, her daredevil lifestyle — cancer, anyone? — is, well, just plain stupid

And yet, she’s boasting about it. She’s making it sound cool, with no ill effects. She’s placing herself above and beyond the risky and aging behavior that affects those of us who are mere mortals, less blessed than Jerry Hall.

Worse, the interview was arranged on behalf of a fundraising campaign for Cancer Research UK.

She says, “I am very against it. I think it looks silly – people with mean-looking eyebrows.”

Aging, it seems. isn’t an issue for the ex-model.

“I think you feel less stressed at my age,” she says. “You are not so bothered – everything is water off a duck’s back. It is something that happens with age; I am not bothered about anything. What will happen will happen.”

And while she doesn’t go to a gym to exercise, she stays fit with “sex, gardening and housework.”

Her beauty routine includes olive oil as a body moisturizer and “very, very expensive” face creams, including La Prairie Skin Caviar which sells for $500 for 50 ml. at Holt Renfrew.

Hall is currently dating a professor of developmental biology, Armand Leroi, who is eight years younger.

“I have a boyfriend, Armand, who I have been seeing since just after New Year,” she tells the magazine. “He is lovely and very clever and very handsome. I am really, really happy. I am very lucky – I feel really blessed in life,” she said.

Hall even commented on the suicide of her former husband’s partner, L’Wren Scott.

So what about those reports that a mere three months after Scott’s death, the 70-year old Rolling Stone was already dating a 27-year old ballerina?

Even though others criticized him for inappropriately moving on so quickly, Hall defended her ex and the father of her four children: “He is single now and he can do what he likes.”

In the end, Hall’s defending Jagger and her careless grace have won me over, even though I hope she’ll cease smoking, stop tanning and quit thinking 58 is “pretty old.”