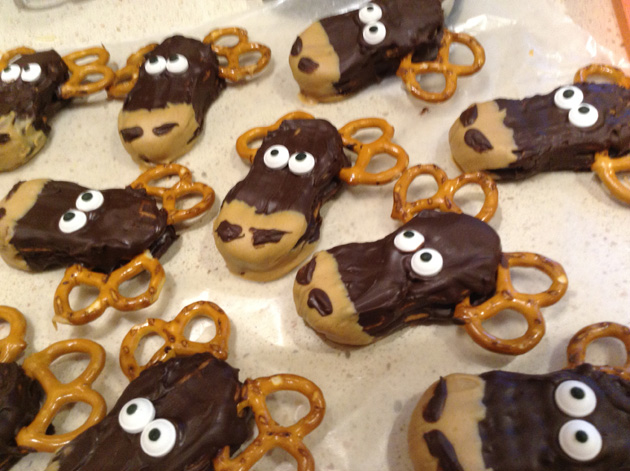 The Middletons just happen to own a party-planning business. Plus, a palace full of servants were on call to help serve the bunny-shaped cookies and clean up afterwards.

A much more important birthday party also took place this month, the day before Prince George’s.

But no servants were available and the grandmother — that would be me — arranged only to attend the festivities. By royal command, of course.

Like every other little girl consumed by the movie, my soon-to-be six-year old granddaughter wanted a Frozen party.

Her mother made the mistake of checking Pinterest for ideas to carry out the theme.

It’s not just peer pressure anymore that motivates people to outdo each other.

Well, it is in a way — except the peers are now not just friends and neighbours but everyone in the world with access to the internet.

Thanks to Pinterest, during several late-night sessions in the kitchen, peanut shaped cookies were transformed into the face of Sven, the Frozen reindeer, with pretzels for antlers. Olaf the snowman kits were assembled with marshmallows and trimmings.

And that was just the beginning…

The conclusion took place at an ice arena rented for the occasion, with permission from Disney to play the Frozen sound track through the audio system during the hour of skating at the party.

It used to be that having a clown or a magician or even a pony at a kid’s birthday party was over the top. Then it became commonplace.

Pinterest has outdone Martha Stewart in raising expectations, making people feel insecure, insufficient and inept about everything from gardening to mixing cocktails to wedding planning.

Just today I got a Pinterest notice about “copycat chic DIY bathroom renovations.”

It’s as if everybody else is living this amazingly creative perfect fantasy life and no matter how hard you try, you probably won’t make it to the peak of Pinterest.

And then there are the people who brag about how many “random followers” they’ve picked up on Pinterest, attesting to their giftedness and creativity at arranging flowers or turning apples into dolls or gilding coffee grounds.

Most of us, however, are left to look longingly at what could be, like kids looking through the window of the candy store.

Maybe the best piece of advice about dealing with Pinterest pressure and the bar it raises impossibly high comes from Queen Elsa herself: Let it go.