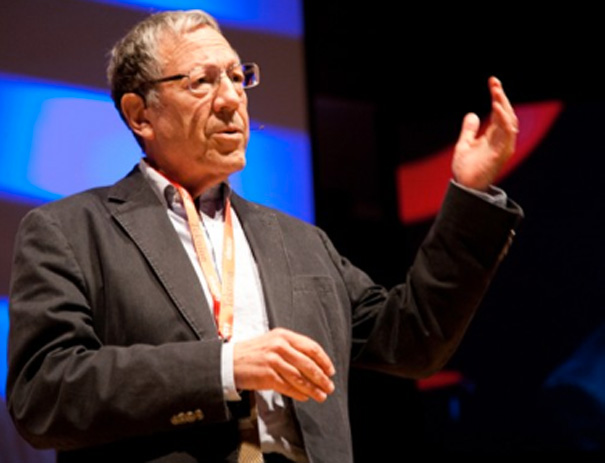 At 74, Irwin Cotler remains incurably optimistic about humanity — despite all the conflict in the world.

The world is becoming a better place, he believes, and will continue to evolve in a positive way.

The former Minister of Justice, parliamentarian and indefatigable international human rights lawyer has been witness to the worst punishment inflicted by authoritarian governments.

He fought long and hard for the freedom of Nelson Mandela and Anatoly Sharansky. And he’s convinced that he himself was poisoned while in Russia a couple of years ago. This year, he was banned from that country.

Nevertheless, at Moses Znaimer’s ideacity this past June and everywhere he speaks, Cotler likes to point out that “the twin evils of the second half of the 20th century” have been vanquished.

“The former Soviet Union no longer exists and apartheid has been replaced with universal franchise in a democratic country,” he said in an interview.

“The Soviet Union withered away because it had heroic figures and I have to credit Gorbachev. He was the right person at the right time.

“I shudder to think of what might have happened in South Africa if not for Mandela.”

He added, “We’re missing the Mandelas in the Middle East. If the Palestinian leadership, had had a Mandela instead of Arafat, there might have been peace.”

Nevertheless, he says, “I believe there will be peace between Israelis and Palestinians.”

Despite his optimism, Cotler recognizes that there’s a long way to go in many places in the world.

Putin has been on the march in Crimea — and Russia is still guilty of human rights violations, he says.

He explains that Magnitzky was an auditor for U.K.-based Hermitage, one of the largest investors in Russia. After he revealed that senior Russian officials perpetrated the largest corporate tax fraud in history, he was arrested, detained, tortured and died at the age of 37 after one year in prison.

“We’re always going to have to be engaged in causes,” he says. “In Africa today, we’ve got the killing fields in South Sudan, the Central Africa rebellions, Darfur again.

“Iran is a country which poses a fourfold threat: terrorism, incitement, nuclear and also massive domestic repression of its own people.”

Radical Islam, he says, is engaged in assaults on Iraq and Syria.

“The foundation of jihadism is the incitement. It begins with cultures of hate transmitted by the new technologies.”

He says, “We could’ve and should’ve intervened in Syria and didn’t. I always thought that in Syria there was real hope for an ‘Arab spring.’

Some of us, at the time, said ‘We need to protect the innocent Syrian people.’

“We were told, ‘If you intervene, it will lead to sectarian warfare and jihadism.’

“Well, everything we were told would happen if we intervened happened anyway.

“What started as a protest by the young people is now a killing field.”

Too often, he says, “The international community is a bystander community.”

In Iraq, there was the possibility for stability and an emerging democracy, he says, “but the government was exclusive and oppressed the Sunni community. Radical Sunnis exploited that abuse of power and Iraq is appearing to unfold in the face of it.

“The international community should’ve held (Shiite Prime Minister Nouri al-) Maliki to account, to assure that the government was inclusive and protective.”

He says, “We still have not learned the lessons of the Holocaust, Rwanda, Darfur. We know what the lessons are, but we’re not acting on them.”

Cotler cites the danger of “inaction, of not bringing perpetrators to justice.”

More positively, Cotler points to Tunisia as “a country that’s emerging as a model for what the Arab Spring could be.

“The Tunisian government did not brutalize the opposition but instead agreed to share power, a model that might be foretelling democracy. Tunisians can be proud.”

Ultimately, he believes, “good will prevail in the world.”