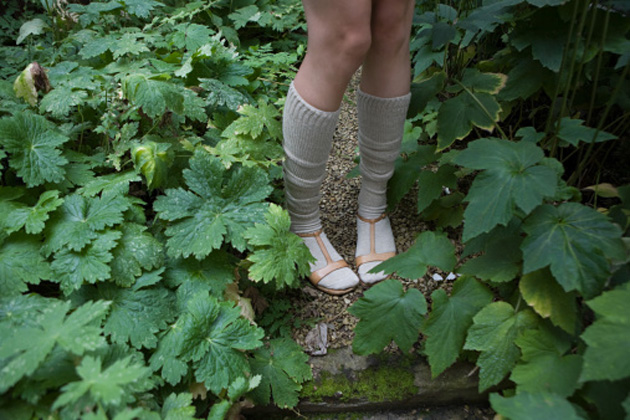 Remember when you could buy summer hose?

Not hose for watering the lawn. Hose you wear on your legs. Hose you used to be able to buy in the hosiery department. At Eaton’s.

Summer hose were ultra sheer. They were meant to enhance women’s legs and make them look smooth and lightly tanned, unmottled and unmarred by veins or scars. Unless you were wearing shoes that exposed part of the foot, like sandals, you simply did not appear in public without appropriate hose.

Now even brides sport naked legs under their Vera Wangs and stuff bare toes into their bridal pumps.

As far as I can tell, the trend started on the runways of Milan about 18 years ago.

Blame for bared calves has also been assigned to the ladies of Sex and the City who teetered and tottered on their Manolos with no hose.

“The latest fashion ripple? The bare leg,” declared a fashion reporter in 1999. “Absolutely nude. No fair cheating with sheer or opaque nylons. We’re talking no stockings. No hose. No security blanket to mask your ghostly gams…”

Never mind that no hose makes no sense. What’s to like? Blistered feet? Sneaky streaky fake tans that fool no one?

A few days ago I witnessed a no-hose woman wearing nude patent pumps with beige cotton footlets sticking out of them. It may have been on trend, but it wasn’t pretty.

Of course, women should be able to wear what they want (exempt clothes that expose not just cleavage but the better part of breasts as a way to attract attention). Women shouldn’t feel they have to cover up their legs to make them more attractive.

But what’s the point of trying to be trendy by making legs look better with spray-on products and tanning potions and at the same time suffer from painful friction between foot and shoe? Now men are supposed to feel the friction too.

There is one caveat: “Please, no mankles after dark – ever.”

But with mankles going mainstream, there has to be a counter trend, of course. That would be sandals with socks. Toronto fashion editor David Graham was on to this in 2008 when he wrote, “the S&S look, commonly worn by nerdy tourists, aging hippies, grunge musicians and outdoorsy types, was trotted out unabashedly during the spring menswear collections.”

This summer, the S&S look has picked up steam. It’s been spotted on David Beckham, Bruce Willis, Sarah Jessica Parker, the Olsen twins. Soon, I hope, summer hose will be trendy again too, also in an ironic sort of way.

Irony is okay . Blisters and bare legs, not so much.