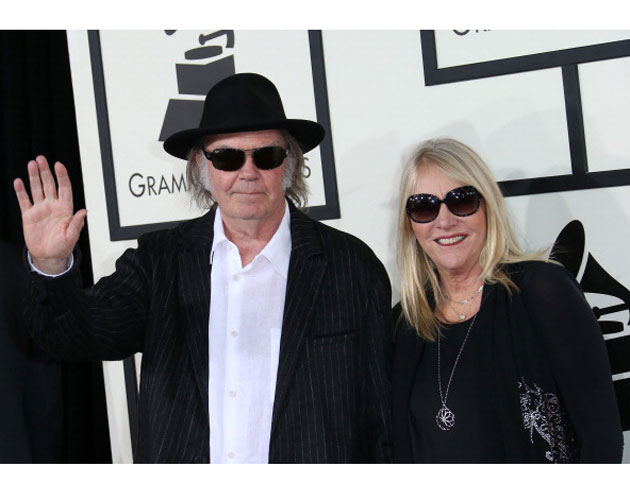 First we learn that Tim Hortons is being bought by an American burger chain.
Now we find out that Neil Young, 68, has filed for divorce from his 61-year old wife after 36 years of marriage.
What’s next? Dismantling the CN Tower to move it to Doha?
Is nothing sacred any more?
News that any couple in their 60s is splitting after a long marriage is always surprising and unsettling — especially to younger people who wonder, “Couldn’t they work it out after all that time? Why now?”
But it’s especially unsettling when it’s a celebrity marriage, with its dubious prospect for longevity in the first place.
And especially when it’s a relationship that seemed strong through the decades, surviving both partners’ brain surgery, and the challenge of raising a child with severe cerebral palsy.
No reason was given for Neil Young filing for divorce on July 29. But here are four good guesses:
1. A younger woman.
2. His wife has finally embarked on her own singing career after waiting for more than 30 years .
3. He’s turning 69 in a couple of months and it’s now or never.
4. He’s Neil Young.
It could be any one, or all of the above, but I’m convinced it’s number four. Because it’s what he does.
In 1975,he split with actress Carrie Snodgrass, leaving her with their 3-year old son, Zeke, who also was born with cerebral palsy.
“Quite frankly,” Snodgress, who never married the singer, told People magazine in 1983, “I think it was time for him to move on. He started hanging out with the guys, going to L.A. alone. Then one day he came back and said he thought it was time for me to leave… I don’t know why we broke up. We never fought.”
Young did the same thing professionally.
In his 2012 biography, “Waging Heavy Peace,” wrote David Carr in the New York Times, “over and over, he is there, and then he is gone — from Buffalo Springfield, from Crosby, Stills & Nash, from his love affairs — and not given to explanations. When he loses interest, he loses interest.
“He broke off a tour with Stephen Stills without warning and sent him a telegram — ‘Funny how some things that start spontaneously end that way. Eat a peach, Neil.’ “
Young told Carr, “You really have to be in a good place, and then you have to be either on your way there or on your way from there.”
“Sometimes,” Young wrote in “Waging Heavy Peace, “a smooth process heralds the approach of atrophy or death.”
We can never know why any marriage ends. Often, one or both partners don’t know why it ends.
But maybe the stress of all those years with a disabled child and high-profile career reached a breaking point.
Or maybe Young just didn’t like his wife’s singing.
John Goddard, who wrote about Young in his book, “Rock and Roll Toronto,” says,
“My reaction would be: How the heck did they stay married for as long as they did? Neil had two children, one with Pegi, with severe disabilities, a strain on any marriage. And Pegi can’t carry a tune. At Live 8 she was terrible, although YouTube has since turned her way down in the mix. Listen beginning 1:48: