What Renee Zellweger Is Facing 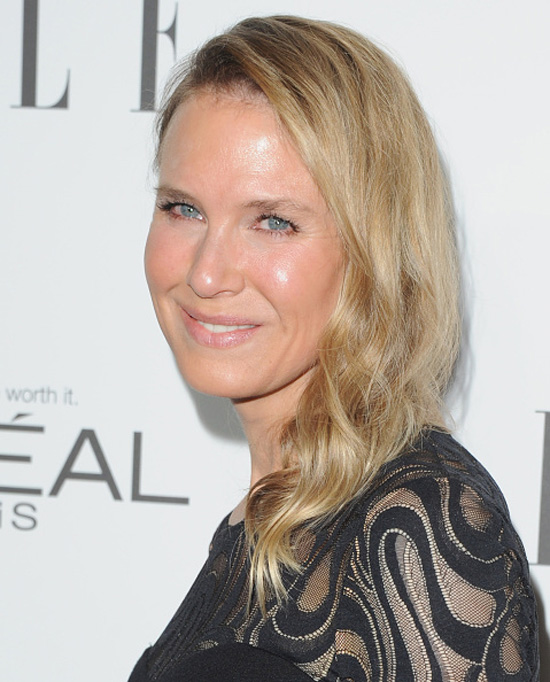 Why has everyone been asking what happened to Renée Zellweger when it’s obvious — and I don’t mean the cosmetic eye surgery that’s changed how she looks. (And why is anyone surprised at that? It’s what cosmetic surgery is supposed to do.)

What happened to Zellweger that’s so obvious is the toxic combination of Hollywood and being a 45-year old female.

Sure, there are some women over 45, even a few over 60, who are still A-listers: Meryl Streep, Helen Mirren, Sandra Bullock, Susan Sarandon (and just because their cosmetic enhancement is subtle doesn’t mean it’s non-existent).

But Zellweger, like Meg Ryan before her, became a Hollywood darling not because of her acting chops but mostly because she was fresh and adorable — something Streep never was.

What was beguiling at first about Zellweger were qualities as fragile and fleeting as a September snowflake.

When I interviewed her at the 1995 Toronto film festival she was here as a total unknown promoting her first movie, Whole Wide World.

Apple-cheeked with a mischievous grin and endearing squint, she confessed that she was thrilled about her new film career because it meant she could now afford to take her dog to the vet. She was even more thrilled because she’d been picked to co-star in a movie with Tom Cruise called Jerry Maguire.

I described her at the time as “beguiling concoction of wholesomeness, ingenuousness, vulnerability and sensuality.” (Thanks to Amanda Hess writing in Slate magazine this week for finding that quote and using it so I could use it, too. And please fix the attribution; I was the Toronto Star’s movie critic when I wrote it, not a lifestyle reporter.)

I also wrote that Hollywood is “a business that regards lovely young things as a raw, renewable resource.”

Today, the Zellweger role in Hollywood is being played perfectly by Jennifer Lawrence — and the same adjectives fit her in every respect.

Turning 45 last April, her chubby cheeks were no longer considered so fresh and fetching and her squinty eyes must have seemed to casting directors to be more hooded with age than impish.

So the old Renée Zellweger lost weight, her face became slimmer and cosmetic surgery changed the shape of her eyes.

In the usual damned-if-you-do and damned-if-you-don’t reaction to Hollywood women and their cosmetic surgery, Zellweger’s face has become a subject of international concern, comment and, disturbingly, ridicule.

Photos of her in poses that aren’t even comparable and so exaggerate the differences — full-face compared with half-profile, for example — are posted so people can evaluate her face on their smart phones.

There’s a distasteful tinge of misogyny and ageism about all this attention to a 45-year old actress who’s trying to look her best and continue her career.

As Hess wrote in Slate (my turn to quote her), “Our baby-faced ingénues are specifically prized for their youth; it’s nearly impossible for them to ‘get better’ with age. (See also: Meg Ryan.) Zellweger’s last critical hit came out in 2005. Hollywood discarded her a long time ago. So now, she’s returned looking nothing like the old Renée Zellweger—you know, the actress nobody wanted to look at anymore. Can you blame her?”

Meanwhile, Zellweger is behaving with a dignity that’s as endearing as was her twentysomething face and personality.

She told People magazine that the conversation about her face was “silly”and said, “I’m glad folks think I look different! I’m living a different, happy, more fulfilling life, and I’m thrilled that perhaps it shows.”