Woody Allen, Bill Cosby, and The Power of Reasonable Doubt 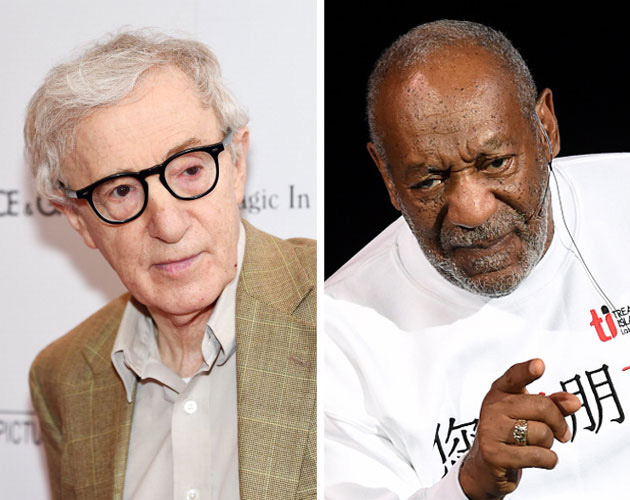 What a difference a year makes.

Almost a year ago today, Woody Allen received the Cecil B. DeMille Award for lifetime achievement at the 2014 Golden Globes, leading to a firestorm of debate when Allen’s estranged son Ronan Farrow tweeted, “Missed the Woody Allen tribute – did they put the part where a woman publicly confirmed he molested her at age 7 before or after Annie Hall?”

Farrow, of course, was referring to the allegation that Allen molested his stepdaughter, Dylan Farrow (Ronan’s half-sister), in the attic of their family home two decades ago. In the ensuing weeks and months debate raged about whether the accusations were true.

Dylan Farrow wrote about the incident for the The New York Times, Allen responded, fellow celebs weighed in, and an endless flow of media commentary debated whether or not Allen did it, and whether it’s even possible, in light of the re-surfaced allegations, to enjoy a Woody Allen film anymore.

At nearly 80, Allen’s reputation and legacy teetered between famous and infamous. In fact, last January it seemed nearly unimaginable that a major studio would want to strike up a new business deal with the director. Now, one year later, Amazon Studios – which won big at this year’s Golden Globes, where it took home two statuettes for it’s TV series Transparent – announced it’s ordered a full season of a half-hour series dubbed Untitled Woody Allen Project. This marks Allen’s first foray into television.

“Woody Allen is a visionary creator who has made some of the greatest films of all-time, and it’s an (honour) to be working with him on his first television series,” said Amazon Studios vice president Roy Price.

Why Woody and Not Cosby?

Last year at this time Woody Allen found himself in a similar position to Bill Cosby today – a major Hollywood star facing allegations of sexual abuse. It’s hard to imagine Bill Cosby fielding offers for TV shows in 12 months time. In fact, NBC already pulled a planned sitcom starring the comedian. So why has Allen been able to ride out his scandal while Cosby’s shows no sign of letting up?

1) There’s more reasonable doubt in the Allen case than the Cosby case. For better or worse, Allen and his defenders have created enough reasonable doubt to keep public opinion from raging completely against him.

Allen had an affair with, and eventually married, ex-wife Mia Farrow’s adopted daughter Soon-Yi Previn. Allen points to Farrow’s hatred of him as the source of the accusations regarding Dylan, attacking her integrity and honesty in a New York Times piece in which he concludes, “[Dylan] has been cheated out of having a loving father and exploited by a mother more interested in her own festering anger than her daughter’s well-being.”

You may disagree, and Dylan’s recounting of the abuse in question is a very powerful read, but there’s enough grounds for deniability in Allen’s side of the story that those who don’t want to believe he is guilty can quell any doubt about it.

Cosby, meanwhile, faces numerous allegations that date back decades from dozens of women, none of whom stand to gain anything. In fact, it’s the opposite – they risk ridicule, scorn, slander, and worse at the hands of a loyal Cosby fan base that doesn’t want to believe that “America’s dad” could have committed such acts.

Compared to Cosby, Allen, with his one accuser against whom he’s built a wall of reasonable doubt, is easier to shrug off and say, “Well, we’ll never know if it’s true so I’m not going to think about it.” Of course, I’m not saying it’s right. But if you don’t want to believe Allen did what he’s accused of, or don’t want to feel guilty/creepy while watching Annie Hall, it’s a way of getting around those feelings.

2) Allen’s scandal was already headline news once before: Not that it makes it any less serious, but a large public contingent has already had an opportunity to absorb and pass judgement on the Woody Allen allegations when they came to light during his court battle for custody of his children with Mia Farrow in the early 1990s. There’s little new evidence today, other than the fact that Dylan is now an adult and can relate her story as such.

In Cosby’s case the allegations aren’t new but, to most of the public who were unaware that they existed, they may as well be. As such, the public is digesting them for the first time, and all at once, and watching on as new accusers come forth.

3) Friends in high places: Whether you like it or not, celebrity endorsements go a long way toward swaying public opinion, whether you’re selling sneakers or repairing the image of an accused sexual predator.

Allen’s accusations came back into the spotlight almost immediately following a star-studded tribute to his career at the Golden Globes. Some of those A-list stars, such as Cate Blanchett, Alec Baldwin and Scarlett Johansson, either came to Allen’s defence or simply refused to pass judgement. It’s true that some stars, like Lena Dunham, pledged support for Dylan, but consider that, aside from Allen’s supporters, a parade of movie stars had just paid tribute to Allen at the Golden Globes. This both helped to remind the public of why they love Allen while offering the opportunity for some fans to rationalize, rightly or wrongly, that all of these big celebrities wouldn’t work with, and praise, Allen if they thought he did these horrible things.

Contrast that with those celebs who came to Cosby’s defence. The list includes his former co-star Phylicia Rashad, Whoopi Goldberg, Cee Lo Green, Rush Limbaugh, singer Jill Scott, actress Debbie Allen, and saxophonist Tony Williams. Not quite as impressive a list from a PR point of view.

4) It’s all in the handling of the situation: As the Washington Post noted in a similar piece, “Cosby and Allen had very different crisis-management strategies.” In short, Allen met the accusations with a detailed statement of his own (no doubt HEAVILY vetted by his lawyers) and then stopped discussing it. He also appeared sparingly, if at all, in public. Cosby, meanwhile, is on a stand-up tour, which means he’s constantly either making news for dates that were cancelled, or for the shows he performs amid protests. He’s mostly released statements through his lawyers, and when Cosby did talk it was to make a tasteless joke about the allegations at a performance in London, Ontario. As well, he allegedly hired people to dig up dirt on his accusers.

In the end, it may be too soon to say that Allen has made it out of his sex abuse scandal unscathed. But he did it once before, and there’s clearly a door open for Allen to quietly tiptoe back into the cultural spotlight.

Time, they say, heals all wounds. Sometimes, though, time simply allows people to forget the wounds ever existed.