Why Madonna’s Mooning Was A Triumph 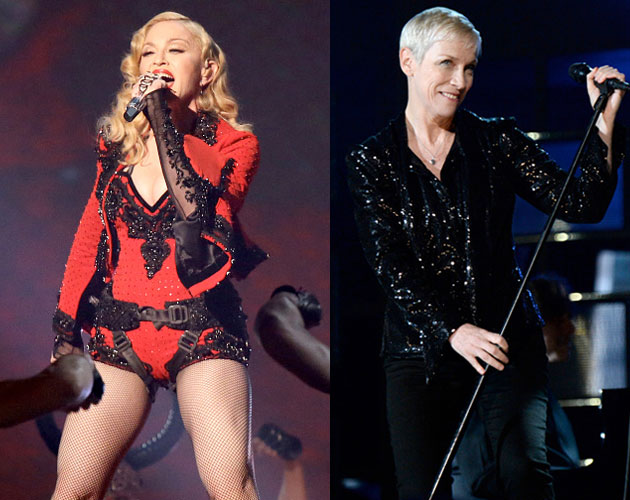 Nothing could have been more predictable than the scorn and disgust provoked by Madonna’s cheeky get-up at the Grammy Awards.

Commenters wanted to know why Madonna can’t age gracefully and tastefully like, say, Annie Lennox, who arrived on the red carpet draped in black, from neck to toe and shoulder to wrist.

All that was missing from Lennox’s outfit was a hijab, or head covering.

But it’s Lennox who’s being held up as a model of what’s appropriate for post-menopausal women to wear in public.

“Saggy baggy old hag. Has to use a big leather strap to hold up that old saggy ass to keep it from hitting her on the back of her knees. Pathetic.”

There’s a lot more nastiness about her sexy matador costume and bare flesh but you get the idea.

The revulsion for Madonna’s extreme cleavage has been outdone only by the horror about her bum exposure after she mooned millions of red carpet watchers.

The in-your-face sexuality of a 56-year old woman is intolerable for most people. It’s considered monstrous and it’s why witches are regarded as abominations.

Women’s sexuality is a potent force and aging is a source of anxiety and when the two are combined, many people are repulsed by it.

Women are traditionally required to please, to be gentle and accepting and not to call attention to their sexuality, even to hide it.

They’re also required to fade into old age, relinquishing sexuality when their bodies are no longer fecund or as pleasing to men.

That, of course, is what’s meant by “aging gracefully” and “dressing age appropriately.”

But Madonna has always broken the rules and thank goodness for that.

She’s exactly the kind of provocateur we aging women need right now, even if we don’t feel the need to moon for photographers.

And as for dressing appropriately for the red carpet, that’s exactly what she did.

The red carpet is as much a show as any performance and the costume is what’s it’s all about.

If we’re going to watch women paraded around and judged for their appearance and body parts, then Madonna deserves applause for playing the game and, even more so, for mocking it.

Sure, we might choose to look elegant and wear something more like Lennox’s tasteful black gown when the occasion calls for dress-up.

But Madonna is doing us all a huge favour in insisting that post-menopausal women don’t have to hide themselves behind the dictates of age-appropriate fashion and graceful aging.