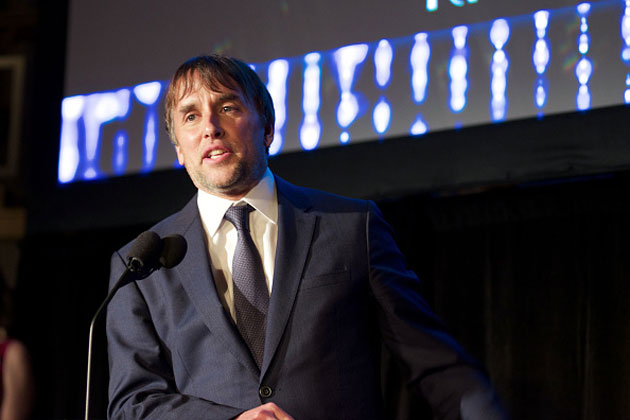 The young guy was eager to promote his little movie scheduled to be shown at the Detroit film society.

So I invited him to come up to the Detroit newspaper where I was working at the time.

Richard Linklater was 29. The movie was Slacker.

Today, the filmmaker is 51.

He’s the frontrunner to win the Oscar for Best Director for his latest movie, Boyhood, which he also wrote.

It’s been nominated in six categories including Best Picture which it’s picked to win, after winning the British equivalent, the BAFTA for Best Picture.

Linklater filmed Boyhood over a period of 12 years.

His unhurried, time lapsing moviemaking may be unprecedented but it isn’t all that surprising when recalling what he had to say decades ago about living slow and letting time go.

Linklater was talking at the time about the characters in his film, slow-track twentysomething slackers.

But, it turns out some 20 plus years later, he might as well have been talking about himself.

“People with a lot of time, a lot of ideas, not necessarily doing something, but not unproductive,” he explained about the slackers in his movie. “Grad students who spend eight years doing a dissertation.

Linklater said he’s always made movies in his head.

Living near the University of Texas in Austin, where he ran a film society, he said he knew there was a movie to be made about that milieu where ideas and the process of thinking are paramount, and where results and achievement are not only irrelevant but even, perhaps, in bad taste.

“They don’t view activity in pass-fail terms, ” he said about slackers.

Most of the money was borrowed and spent on film processing and food. “We ate OK, ” he said, “a lot of tacos and stir-fry out of my own kitchen.”

Slacker has no plot, no premise and nearly 100 characters who drop in, disappear and maybe show up again later.

“It’s interesting that an older audience finds irony in it, ” he said. He doesn’t deny the irony. “It’s hard to spend time in the ’70s and ’80s and, if you’re thinking at all, not have a strong sense of irony.”

There’s a lot of talk about Smurfs and Scooby-Doo in Slacker. Making movies, Linklater said, is the ultimate slacker occupation.

“You can be a filmmaker for a decade and not make a film, ” he said. “ Even when you’re making a film, you spend most of the time not making the film.”

Linklater was wary about getting wooed by Hollywood after the surprising success of Slacker.

“Hollywood is a big company town, ” he said. “You fit into that, kick out a product. I don’t look at cinema as career or a job.”

Kudos (and maybe a couple of Oscars) to Linklater for doing it his way.

With maturity came the realization that a career or a job is a necessity and cinema is as good as any way to earn a living and better than most.

And so he managed to “kick out “a product” on a regular basis: Dazed and Confused, School of Rock, Bad News Bears, Before Sunrise, The Newton Boys, Before Sunset.

But he also refused to relinquish the luxury of making a film the slacker way, letting years pass, telling a story that only time can tell.